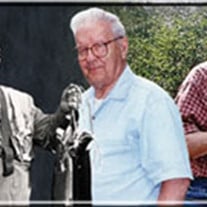 FRANK'S MEMORIES SHARED WITH CINDY:Frank (Spud) Gutowsky, Irons, Michigan, aged 96 and 7 months, went to be with his Lord on Friday, July 29, 2011, after a brief illness. He was born on the family farm, December 20, 1914 and he would also say... View Obituary & Service Information

The family of Frank Gutowsky created this Life Tributes page to make it easy to share your memories.

Send flowers to the Gutowsky family.