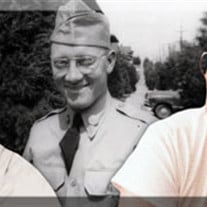 LIFE STORY:Frederick &#8220;Fritz&#8221; Holden was one of those men who seemed to know and be known by all. In part it was his iconic blue stepside work truck, partly because of his trademark cap, or often through his meticulous craftsmanship... View Obituary & Service Information

The family of Frederick E. Holden created this Life Tributes page to make it easy to share your memories.

LIFE STORY:Frederick “Fritz” Holden was one of those men who...

Send flowers to the Holden family.