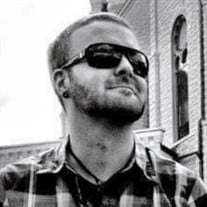 Gabriel “Gabe” James Nichols aged 39 of Bryan, Ohio and formerly of Scottville, passed away November 15, 2021 from a Cardiac Aortic Dissection after being life flighted to Lutheran Hospital in Fort Wayne, Indiana. Gabriel was born March 19, 1982 in Ludington, the son of James and Mary (Cooper) Nichols. He grew up on the Cooper/Nichols Family Farm in Riverton Township and attended both Mason County Central and Mason County Eastern High Schools graduating in 2000. While in high school, he served as co-captain on the cross country team and was sidelined as a state cross country meet qualifier due to a leg injury. Gabriel also ran distance on the track team and played U19 recreation soccer. He was a member of the Community Foundation for Mason County Youth Action Committee which was involved with fundraising for the Waterfront Playground project. Gabe literally grew up in the family-owned pharmacy - Nichols Drug Store in Scottville, serving as a stock boy from a very young age, but would tell you his favorite job was working for Lake Michigan Carferry as a car attendant. His mind was never far from his love of Hamlin Lake and Lake Michigan, sailing, boating, and water skiing. He loved the family winter ski vacations as well. After high school graduation, Gabe enlisted with the United States Coast Guard and was several weeks away from basic training when he was medically declared ineligible. Following surgery, he had to re-evaluate his future, picked his second passion of cars, and enrolled at the University of Northwestern Ohio in the High-Performance Automotive Program. He graduated in May of 2005 and traveled with the NHRA Circuit - Schumacher Racing Team out of Indianapolis and then went on to McKinney Corp chassis builders of Lafayette, Indiana and the Pipefitters Union in Lima, Ohio. In 2019, he started his own welding/fabrication business called Metal Manipulation in Bryan, Ohio. Gabriel will be greatly missed by his three precious children Zoee (16), Avalon (16) and Mason (5); his parents Jim and Mary Nichols; greatest brother ever Joshua Nichols and his family Samantha, Ryah and Khloe. Gabriel will also be missed by his special friend Dani Scribner and her daughter Azlin; good friend/former wife Kaycee Nichols; his special buddies Austin, Caleb, Calvin, and Rusty; along with many others. He loved his Aunts/Uncles dearly and special welding Uncles Lane Cooper and Freddie Cooper; his "adopted sisters" Taylor Claire and Spencer Saxton, and Rebel his dog. His one regret living a state away was missing family times with cousins at the Wagner 4th of July celebrations. He so enjoyed the family gatherings and seeing all the cousins. Gabriel was preceded in death by his grandparents, special cousin David Claire, best 4-H leader - Uncle Duane Cooper, and numerous aunts and uncles and cousins. Gabriel's family is so grateful and humbled by the care and love that Gabe and his family received from staff at the Lutheran Hospital in Fort Wayne and the Business Community and friends in Bryan, Ohio. Gabriel's final act was with the National Donor Registry giving the gift of life. A recipient will see again, a heart will beat again, a bone will help someone to heal, and someone will have a beautiful, colorful skin tissue tattoo. Those who wish to remember Gabe with a memorial donation are asked to please consider the higher education fund that has been established for his children; c/o Joshua Nichols, Personal Representative, 1034 West Hawley Road, Scottville, Michigan 49454. "Life is made of ever so many partings welded together." - Charles Dickens. The Mass of Christian Burial will be celebrated for Gabriel at 2:00 pm on Friday, December 17 at St. Simon Catholic Church in Ludington with Rev. Daniel DePew as Celebrant with gathering of family and friends to follow. Gabe will be laid to rest at Pere Marquette Cemetery in Ludington next summer. Visitation with Gabe’s family will take place on Friday, December 17 from 12:00 noon until time of Mass at St. Simon Church.

The family of Gabriel James Nichols created this Life Tributes page to make it easy to share your memories.

Send flowers to the Nichols family.