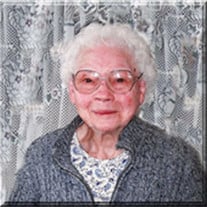 OBITUARY:Mrs. Genevieve Sommerfeldt, age 94 of Riverton, passed away on Thursday, June 24, 2010. Genevieve was born August 12, 1915 to Paul and Meta (Englebrecht) Gerbers, the second of four children growing up on the family farm in Riverton Township. She graduated from Ludington High School in 1934 and attended Alba Beauty Academy in Grand Rapids, graduating in 1937. Genevieve worked as a beautician through 1948. Later on she worked many years as a cook for Mason County Central Schools before retiring. On October 3, 1939 she was wed to Ranold Thurow at Bethlehem Lutheran Church in Riverton and together they raised their young family of four children, Robert, Audrey, Roger and Luellen. Ranold preceded her in death in 1966. Genevieve continued on with her family, living on the family farm and was blessed again with marriage in 1976 to Harold Sommerfeldt. They spent many wonderful years together until his death in 2001.Genevieve was very active and involved in her community. She served as a Red Cross volunteer, was active in the East Riverton Ladies Club, and was a member of Our Savior Lutheran Church in Scottville, where she was involved in the Lutheran Women’s Missionary League and the Women’s Service Guild. She took the opportunity to live out her faith over the many years that she taught Sunday School and Bible School classes at the church. One of her favorite ways to demonstrate her love for her family was in sharing her wonderful skills as a great cook. Her specialty was baking and her dinner rolls were her grandchildren’s must-have for birthday dinners.Genevieve was preceded in death by her parents; her brother Jerry; her sister Alice Bedker; husband Ranold Thurow and husband Harold Sommerfeldt. She will be lovingly remembered by her children Robert (Deedra) Thurow, Audrey (Ray) Keith, and Roger (Lela) Thurow, all of Scottville, and Luellen DeWall of North Muskegon; her grandchildren Greg (Nadene) Thurow, Chris (Stephanie) Thurow, Jillyn May, Jeffrey (Heather) Thurow, Bethany (Nate) Oliver, Tricia Keith, Timothy (Jessica) Keith, Jody Mazurek and Niki DeWall; sixteen great grandchildren; her sister Carol Schoenherr and her sister-in-law Marybelle Gerbers.Funeral services for Genevieve will be held at 11:00 AM on Monday, June 28 at Our Savior Lutheran Church in Scottville with her pastor, Rev. James Schroeder officiating. Visitation will be held at the church from 10 AM until the time of the service. Interment will take place at Center Riverton Cemetery.

OBITUARY:Mrs. Genevieve Sommerfeldt, age 94 of Riverton, passed away on Thursday, June 24, 2010. Genevieve was born August 12, 1915 to Paul and Meta (Englebrecht) Gerbers, the second of four children growing up on the family farm in Riverton... View Obituary & Service Information

The family of Genevieve Elsie Sommerfeldt created this Life Tributes page to make it easy to share your memories.

Send flowers to the Sommerfeldt family.