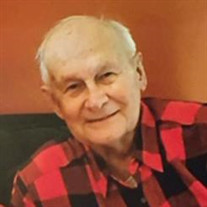 George J. Parmentier Sr. aged 80 of Custer passed away on Saturday, January 11, 2020. George was born on November 16, 1939 in Ludington, the son of John Albert and Helen (Gudleikis) Parmentier and graduated from Custer High School with the class of 1957. On April 2, 1960 he married Edith “Cookie” McIntosh at St. Mary’s Catholic Church in Custer and they celebrated 44 years together before Edith preceded him in death in 2004. George was always a farmer at heart and worked for Cameron Farms in Custer during his high school days. Shortly after graduation, George worked at the Ludington Foundry before enlisting with the Army National Guard. Following his service, he worked as the Property Manager for Camp Martin Johnson YMCA and managed the Ward Hills Ski Area. He was also employed as a maintenance mechanic for Stokely’s Cannery in Scottville and worked at Whiskey Creek Resort. When he and Cookie lived in Irons, George served as a Lake County Commissioner, was on the Baldwin Public School Board, and served as a Lake County Deputy. With his love of farming, George was always willing to lend a helping hand to local farmers when they needed extra help. As his family was growing, they enjoyed time spent together roller skating at Johnny’s and skiing, often at Ward Hills, and in his later years, George loved traveling the country in his RV listening to the Statler Brothers on the radio and meeting new friends along the way. Along with his wife Cookie, George was also preceded in death by his parents and his brother Leonard. George will be greatly missed by his children Deb (Howard) McMullin of Allendale, George (Tammy) Parmentier Jr. of Newaygo, Tina (Shawn) Martinie of Zeeland, and Robert (Tina) Parmentier of Irons; 9 grandchildren, 10 great-grandchildren; his special friend and companion Darlene Sorensen of Walhalla; and his sister Joan Hasenbank of Free Soil, along with several nieces, nephews, cousins, and many great friends. The Celebration of Mass will take place for George at 11:00 am on Friday, January 17 at St. Mary’s Catholic Church in Custer with Rev. Daniel DePew as celebrant. Burial will take place at Bachelor Cemetery in Fountain later in the spring. Friends may meet with his family on Thursday evening from 5:00 – 8:00 pm at Wyman Funeral & Cremation Services in Scottville, and on Friday morning from 10:00 until time of Mass at St. Mary’s Church. Those who wish to make a donation in memory of George are asked to consider Mason County 4-H.

George J. Parmentier Sr. aged 80 of Custer passed away on Saturday, January 11, 2020. George was born on November 16, 1939 in Ludington, the son of John Albert and Helen (Gudleikis) Parmentier and graduated from Custer High School with the... View Obituary & Service Information

The family of George Parmentier Sr. created this Life Tributes page to make it easy to share your memories.

Send flowers to the Parmentier family.