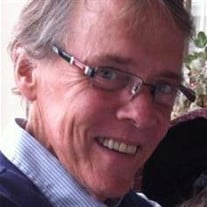 George J. Reed, aged 61 of Ludington passed away on Sunday, May 24, 2015 at Spectrum Health Butterworth Hospital in Grand Rapids. George was born on March 15, 1954 in Ludington, the son of George W. and Marilyn (Rikkers) Reed, and graduated from Ludington High School with the class of 1972. He earned his Bachelor’s Degree in Education from Western Michigan University in 1976 and began his teaching career for the Mason County Central Schools. On March 23, 1979, George married Jayne A. Halvorsen at the Scottville United Methodist Church and they have celebrated 36 years by each other’s side. George taught, coached, and directed musicals at every level in his 30 plus years of teaching for MCC. He taught in the elementary and middle school buildings, coached basketball, football, and cheerleading, and directed over 30 plays and musicals with the students in the middle and high school. George also directed musicals at West Shore Community College, and at the Ramsdell Theatre in Manistee. George had a special way of connecting with the students he worked with. Whether in the classroom, on stage, or in competition, George saw the potential in each person and through his humor and patience helped them thrive. George loved being outdoors, and when he wasn’t out on the course playing golf, he could be found working in his gardens around the house. He was a longtime member of Community Church in Ludington where he sang in and played bells with the choir’s. In their retirement, he and Jayne would spend the winter in Texas at the Lakewood RV community playing golf and volunteering for the countless activities at the park. George was preceded in death by his parents. He will be greatly missed by his wife Jayne, his son Stephen Reed and friend Kelly Smith of Mason, his daughter Kathryn Reed of Astoria, NY, his grandchildren Alexandra Reed of Ludington, Zakary Gibson, Addison and Vincent Reed all of Mason, his sisters Christine (Ronald) Harr of Ft. Mead, Baltimore, MD, and Mary Chavalia and friend Steven Anderson of Ludington, his niece Amy (James) East of Baltimore, his nephew Christopher Chavalia of Ludington, his sisters-in-law Mary Halvorsen and Janice Ramponi both of Ludington, and countless students and friends whose lives he touched. In keeping with George’s wishes, his family will have a private funeral service and there will be no additional visitation. Burial will take place at Lakeview Cemetery in Ludington. Those who wish to make contributions in George’s memory are asked to consider the American Cancer Society.

George J. Reed, aged 61 of Ludington passed away on Sunday, May 24, 2015 at Spectrum Health Butterworth Hospital in Grand Rapids. George was born on March 15, 1954 in Ludington, the son of George W. and Marilyn (Rikkers) Reed, and graduated... View Obituary & Service Information

The family of George J. Reed created this Life Tributes page to make it easy to share your memories.

George J. Reed, aged 61 of Ludington passed away on Sunday, May...

Send flowers to the Reed family.