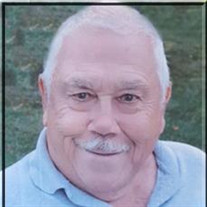 Gerald Lloyd Couturier aged 86 of Ludington passed away on Monday, April 11, 2016 at Spectrum Health Ludington Hospital. Gerald was born on May 31, 1929 in Lake Leelanau, Michigan, one of 11 children of David and Laura (Brow) Couturier, and served his country during the Korean Conflict with the United States Army. On May 25, 1957 he married Lorraine Lewis at St. Mary’s Catholic Church in Lake Leelanau and they celebrated 41 years together before Lorraine preceded him in death on January 24, 1999. Gerald worked on the C & O Railroad car ferries for over 38 years, retiring in 1988. In his retirement, he enjoyed working at his son’s blueberry farm in Hamlin Twp. and became known as “Mr. Blueberry.” He was a member of St. Simon Catholic Church in Ludington, the Little Finger VFW Post 7731 in Lake Leelanau, the Edwin Ewing American Legion Post 76 in Ludington, and the Loyal Order of Moose. Along with his wife Lorraine, Gerald was preceded in death by his parents, his brother Raymond, and his sister Eloise Walters. Gerald will be lovingly remembered by his children Barbara Higby and fiancé Don Vistine of Clear Lake, IN, Mark Couturier and wife Kathy of Ludington, Gerald Couturier and wife Keli of Ypsilanti, William Couturier and wife Sheryl of Pentwater, his grandchildren Brandi (Marlin) McClure, Danielle (Andrew) Lawrence, Marcel Couturier, Brett (Rachel) Couturier, and Trevor Couturier, his great-grandchildren Jaiden, Keegan, and Camden McClure, Brooklyn, Carson, and Eila Couturier, Olivia Jolly, and Parker Couturier, his brothers David (Dorothy) Couturier, Leonard (Ditto) Couturier, and Linus (Loretta) Couturier all of Lake Leelanau, Bernard (Martha) Couturier of Battle Creek, and Alvin (Vicki) Couturier of Arkansas, his sisters Ruth (Victor) Kalchik of Lake Leelanau, Luella (Dale) Furnish of Scottsdale, AZ, and Anna May (Gerald) Kelenski of Cedar, MI, his sister-in-law Beverly Couturier of Gaylord, special family friend Judy Stever of Ludington, and numerous nieces, nephews, and cousins. The Mass of Christian Burial will be celebrated for Gerald at 11:00 am on Thursday, April 14 at St. Simon Catholic Church with his nephew Rev. Paul Kalchik as celebrant. Burial will follow at South Victory Cemetery. Friends may meet with his family for a time of visitation on Wednesday from 5:00 – 8:00 pm at Wyman Funeral & Cremation Services – Stephens Funeral Home in Scottville and on Thursday morning from 10:00 am until time of Mass at the church. The Rosary will be prayed for Gerald Wednesday evening at 7:30 pm at the funeral home. Those who wish to remember Gerald with a memorial contribution are asked to consider St. Simon Catholic Church.

Gerald Lloyd Couturier aged 86 of Ludington passed away on Monday, April 11, 2016 at Spectrum Health Ludington Hospital. Gerald was born on May 31, 1929 in Lake Leelanau, Michigan, one of 11 children of David and Laura (Brow) Couturier, and... View Obituary & Service Information

The family of Gerald Couturier created this Life Tributes page to make it easy to share your memories.

Gerald Lloyd Couturier aged 86 of Ludington passed away on Monday,...

Send flowers to the Couturier family.