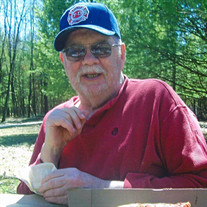 Gerald M. “Jerry” Chancellor aged 76 of Fountain passed away unexpectedly on Saturday, June 5, 2021 at his home. Jerry, the son of Moran E. and Bertha A. (Schoenherr) Chancellor, was born in Ludington on October 31, 1944. He graduated from Mason County Eastern High School with the class of 1963. He attended Northwestern Michigan College in Traverse City. Uncle Sam said he was needed, and he joined the Army in 1965 serving in Fairbanks, Alaska. He always valued education and continued learning throughout his life by attending courses at the University of Alaska, Mid-Michigan Community College in Harrison, West Shore Community College, and the National Fire Academy in Emmitsburg, Maryland. On July 16, 1966, while on leave from the Army, he married his best friend Shirley A. Johnson. This year would have marked their 55th anniversary. Jerry worked as a cable splicer and installer for General Telephone Company for 33 years. After retiring from the phone company, he worked security at Packaging Corporation of America for several years. Jerry served the community of Fountain in any way he possibly could and was one of their greatest advocates. He was a member of numerous organizations, often serving in leadership roles. He was Past-President of the Fountain Action Youth Recreation, Little League Coach, and Cub Master for the Cub Scouts. He was a player and coach for the infamous Fountain Merchants Slow Pitch Softball team. He was currently serving on the village council as a trustee as he had done for many years. Jerry was one of the driving forces behind the construction of the Fountain Heritage Park and could often be seen working at the site. If an event were held in Fountain, chances are you would see Jerry involved in it. Jerry was probably best known for his service on the Fountain Area Fire Department. He was a member for 58 years and served as Fire Chief for over 19 years. He was instrumental in building the current fire station. Jerry did not limit his service to Mason County but served the entire state. He was on the Michigan State Firefighters Association Board and was elected president in 1999-2000. As a past-president, he remained involved in the MSFA. Jerry also served as one of Michigan’s representatives to the National Volunteer Fire Council for several years. After the tragic loss of Trooper Paul Butterfield, Jerry and Shirley organized the annual Memorial Service for Paul. Jerry was an avid race fan and enjoyed watching and attending races. In his younger days, he raced at several area dirt tracks. He took great pride in restoring his 1953 Chevy Bel Air into an unofficial Fire Chief car. He loved hunting and looked forward to going to deer camp every year. He loved fishing as well, especially with his grandkids. He liked Motown and Johnny Cash. Jerry had a great love of life and enjoyed teasing, joking, and playing pranks! In his last years, he developed Parkinson’s disease which affected his mobility. This did not stop him from being active. He served as president of the Mason-Lake Parkinson’s Support Group and attended numerous conferences. One of his last accomplishments was creating a Retired Fire Chief’s Club which is meeting monthly. Jerry was a member of Our Savior Lutheran Church in Scottville. He also attended non-denominational Christian services in Fountain. He had a personal relationship with Christ. Jerry was preceded in death by his parents and his sister Yolanda Vest. Jerry will be greatly missed by his wife Shirley; their children Richard (Shannon) Chancellor currently serving with the Air National Guard in West Virginia, Andrea (Jim) Herrema of Fountain, and Ryan Chancellor (Laura Hash) of Alexandria, Virginia; his grandchildren Kyle, Kevin, and Jacob Herrema, Destiny and Curtis Chancellor; his brothers-in-law John Vest of Fountain, Richard Johnson of Rialto, CA, Joseph Kuncaitis of Williamsburg, and Robert (MaryAnn) Kuncaitis of Lansing; his sisters-in-law Kathy MacDougall, Betty (Bill) Zweigle, Pat (Mike) Kuncaitis-Newman all of Branch, and Teresa Gustafson of Sheridan, WY; along with numerous nieces, nephews, great friends, and firefighters throughout Fountain, Mason County, and around the State of Michigan. A Funeral Ceremony with full Firefighter Honor Detail will take place at 2:00 pm on Saturday, June 12 at Our Savior Lutheran Church in Scottville with Rev. John Hansen officiating along with family friend Pastor Keith Foisy. Burial will follow with military and firefighter honors at Fountain Cemetery. Friends may meet with Jerry’s family on Friday evening from 5:00 – 8:00 pm at Wyman Funeral & Cremation Services in Scottville and on Saturday afternoon from 1:00 pm until time of services at Our Savior Lutheran Church. Those who wish to remember Jerry with a memorial donation are asked to please consider Fountain Area Fire Department or Fountain Chamber of Commerce Pole Banner Fund.

The family of Gerald "Jerry" M. Chancellor created this Life Tributes page to make it easy to share your memories.

Send flowers to the Chancellor family.