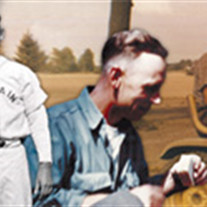 Gerald Wesley McCormick believed in hard work. He built his company from the ground up, and found the reward for his hard work in the company of his beloved wife and children. He was a devoted father who regarded his family as his greatest achievement.Following the sinking of the Lusitania, President Woodrow Wilson led his country into the First World War. This was an uncertain time. Newspapers speculated each day on the outcome of the war. In Fountain, Michigan, Fred McCormick and his wife Pearl Chatfield maintained their optimistic spirits by focusing on a different future, the future of their family. They were expecting a child, and on June 18, 1918 they were blessed with the healthy birth of their son Gerald Wesley McCormick.Gerald grew up on the family farm in Fountain in the company of his brother Gilford and his sisters, CleoBelle and Clarice. He left school after the seventh grade: his father had taken ill, and Gerald was needed on the farm. As a young man he enjoyed attending dances around the area. In this fashion he became better acquainted with Beatrice Klopfenstein, a neighbor. A romance developed between them, and Gerald soon asked for her hand. They were married at Scottville United Methodist Church in 1939.The newlyweds continued to live and work in Fountain until the eruption of World War II, which threatened to drastically alter Gerald and Beatrice’s life together. Gerald received his draft notice, but was never inducted. During the war he supported the war effort by working as a machinist at Seal Power in Muskegon. He also drove liverstock haulers to stockyards in Scottville, and double-deckers to Chicago. Many times the return trip involved transporting prisoners, often in the same trailer he’d just used to haul the livestock.At the end of the war, Gerald and Beatrice returned to Fountain and started a pulp wood business. He had a large contract with Packaging Corp. in Manistee, which provided steady work over the years, but soon the quota became too difficult to fill. In 1952, he decided to switch over to sawing pallet stock and assembling pallets, and began the Gerald McCormick Sawmill. Begun more than fifty years ago with just a handset circular sawmill, an old dozer, and three employees, Gerald’s tenancious personality deserves the credit for the success of the business today.Gerald and Beatrice were blessed with three sons, Robert, Jerry, and Lee. Gerald enjoyed being a father, and he was proud of his sons. He taught them important lessons through his own example. He believed in cleanliness and order. He mowed the lawn twice a week to perfection, and did everything he could to keep the wandering deer from messing with his grass and shrubs. He even installed an electric fence. When the sun bothered him while mowing, he built a canopy for his riding mower. Gerald kept a workshop behind the house; it was exceptionally clean and thoroughly organized, very state-of-the-art. An early riser, his light was always on in the morning, and if you needed him to fix something, you had better deliver your request before seven a.m. He could fix anything -- technology, motors, electrical appliances, TV’s, VCR’s, radios -- you name it. He tweaked every satellite dish in the town of Fountain, and was always puttering, finding new ways to keep busy. Sometimes he worked twenty-four hours a day. He always liked a challenge, and would tackle things that others gave up on, and wouldn’t quit until he succeeded.Gerald was an active member of his community, enjoyed helping others, and was always available to lend a hand to a neighbor in need. He was a big supporter of many events in the community. In his younger days, he played catcher and managed the Fountain Baseball team. Every Sunday, the team would play against another town from the area. The games were truly a community event where everyone came to watch, usually with their picnic baskets and blankets nearby. In his "retirement," Gerald kept up on current events: he read the newspaper each day, and watched CNN in the evenings, unless a Detroit Tigers game was on TV. He served on the Village Council for many years as Clerk, and also helped organize the Fountain Area Fire Department. Gerald left his mark on the community around him, and many young men viewed him as a mentor and second father.In 1975, Gerald sold the mill to his son Jerry. Although he sold the mill, he was hardly done working. He found new ways to keep busy, fixing the machinery and offering his opinion, whether it was wanted or not. He was known to say, “I may not always be right, but I’m still the boss.” He possessed a fiery personality, was determined and even-tempered, as long as you followed his lead. He believed in a job well done, and kept working until everything was just right. His attitude toward perfection enabled him to build a successful company that employed and supported many people from the community over the years.Gerald treasured his family and was happiest when he was in their warm company. In his later years, he was perfectly content to sit on a lawn chair in the coolness of his garage, surveying the world around him, and enjoying one of Beatrice’s homemade sour cream cookies. Among the many people whose hearts he touched, he will be greatly missed.Gerald died on Friday, March 7, 2008 at his home, with his beloved Beatrice at his side. He was preceded in death by his parents, his son Robert Lee McCormick, his sister Cleo Belle Reene, and his grandson Justin Travis McCormick. He will be greatly missed by his wife of 68 years Beatrice, his sons Jerry (Marcia) McCormick, and Lee (Patti) McCormick, grandchildren J.W. (Gail) McCormick, Jeremy (Kristina) McCormick, Cheryl, and Chevy McCormick, his great-grandchildren Travis and Megan McCormick, Madisyn McCormick, and Kaitlyn Thompson, his sister Clarice Krupinski, his brother Gilford (Meretta) McCormick, and numerous nieces and nephews.

Gerald Wesley McCormick believed in hard work. He built his company from the ground up, and found the reward for his hard work in the company of his beloved wife and children. He was a devoted father who regarded his family as his greatest achievement.Following... View Obituary & Service Information

The family of Gerald Wesley McCormick created this Life Tributes page to make it easy to share your memories.

Send flowers to the McCormick family.