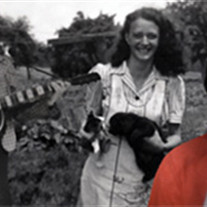 Gladys Esther Laude was a loving wife, mother and grandmother who cherished the time she spent with her family. Though shy in personality, she was bold in creativity. Her talent for music, poetry and story unfolded the beauty of her heart and... View Obituary & Service Information

The family of Gladys Esther Laude created this Life Tributes page to make it easy to share your memories.

Gladys Esther Laude was a loving wife, mother and grandmother...

Send flowers to the Laude family.