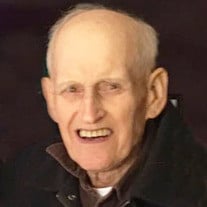 Gregory S. Kozlowski aged 84 of Fountain passed away on Thursday, March 28, 2019 at his home. Greg was born on February 19, 1935 in Chicago, the son of Adelbert and Jeanine (Granica) Kozlowski and graduated from Scottville High School with the class of 1952. He served his country in the post Korean Conflict era with the United States Army, stationed in Japan. Upon his discharge from service, he returned to Mason County and married Velma A. "Toni" Rotta on September 19, 1959 at St. Mary's Catholic Church in Custer. They have celebrated 59 wonderful years by each other's side. Greg also began working for Dow Chemical in Ludington as a Pipefitter, retiring in 1996 due to health concerns. He always enjoyed meeting up with his former classmates and co-worker's on a regular basis. Away from work and in his retirement Greg farmed and raised cattle as a hobby farmer. In his free time, he was a voracious reader. A people-person, his greatest joy was reserved for time spent with family, friends and his grandchildren, whom he loved dearly. Greg will be greatly missed by his wife Toni, his children Jennifer Rice and husband Ken of Chesapeake, VA, Jill Petersen and husband Michael of Scottville, Amy Richardson and husband Dale of Alto, MI, and Gregory Kozlowski II of Fountain; his grandchildren David Rice, Carolyn Bertucci and husband Brent and their daughter Blair, Wynn and Penny Petersen, and Samantha Richardson. Greg was preceded in death by his parents, his brother Hilary "Bunny" Kozlowski, and his sister Gail Prazak. The Funeral Mass will be held for Greg at 11:00 am on Friday, April 5 at St. Mary's Catholic Church in Custer with Rev. Daniel DePew presiding. Burial will take place at St. Mary's Cemetery later in the spring. Friends may meet with his family for a time of visitation on Thursday, April 4 from 6:00 - 8:00 pm at Wyman Funeral & Cremation Services - Stephens Funeral Home in Scottville with a Prayer service beginning at 7:30 pm. Those who wish to remember Greg with a memorial donation are asked to consider Mason County Mutts, or Lakeshore Animal Friends, honoring his love of Cats and Dogs.

Gregory S. Kozlowski aged 84 of Fountain passed away on Thursday, March 28, 2019 at his home. Greg was born on February 19, 1935 in Chicago, the son of Adelbert and Jeanine (Granica) Kozlowski and graduated from Scottville High School with... View Obituary & Service Information

The family of Gregory Stephen Kozlowski created this Life Tributes page to make it easy to share your memories.

Gregory S. Kozlowski aged 84 of Fountain passed away on Thursday,...

Send flowers to the Kozlowski family.