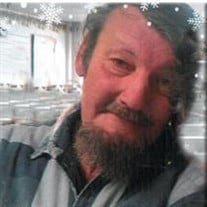 Harold Max Wilkes Jr., aged 59 of Custer, died peacefully on Wednesday, February 18, 2015 at Tendercare of Ludington. Harold was born on September 10, 1955 in Addison, MI, the son of Harold and Cleta (Oulch) Wilkes. On May 15, 1993, he married Carolyn Muzzy in Ludington, and they have celebrated 21 years together. Harold loved farming and worked several years for the Briggs Farm in Scottville, and also helped out some of his friends on their farms when needed. He enjoyed hunting, fishing, watching NASCAR, gardening, and using his welding skills making trailers. Harold was a member of the Custer Gold Bar VFW Post 5096 Men’s Auxiliary, the North American Hunting & Fishing Club, and was a member of Handyman. He was preceded in death by his father Harold Sr., and his stepdaughter Katherine Golnick. Harold will be greatly missed by his wife Carolyn, his sons Harold (Stacey) Wilkes III of Addison, and William (Angie) Wilkes of Clark Lake, his stepdaughter Ginger Darke of Muskegon, 4 grandchildren, 6 step grandchildren, 19 step great-grandchildren, his mother Cleta Ahlstedt of Missouri, his sister Darlene Sizemore of Nebraska, his brothers Lee Wilkes of Arizona, and John Wilkes of Jackson, his In-laws Everett and Ruth Thorne, and several brothers-in-law, sisters-in-law, aunts, uncles, nieces, nephews, cousins, and many great friends. A Celebration of Harold’s Life will be held on Sunday, June 28 from 2:00 - 4:00 PM at the Custer Gold Bar VFW Post 5096. Those who wish to remember Harold with memorial contributions are asked to consider the Custer Gold Bar VFW Post 5096.

The family of Harold M. Wilkes Jr. created this Life Tributes page to make it easy to share your memories.

Send flowers to the Wilkes family.