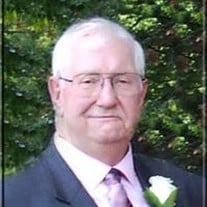 Harvey Jay Buter, aged 78, of Ludington, went to his heavenly home on June 10, 2015. Harvey worked for years at Clark Floor Machine in Muskegon and Simonds Industries in Big Rapids before retiring to Scottville. Harvey was an antique car enthusiast, having restored a 1930 Model A, 1936 Ford and other various cars throughout the years. He was a charter and active member of the Portside A’s Model A Club. Harvey was also an active member of First Christian Reformed Church in Muskegon, Fellowship Christian Reformed Church in Big Rapids, Mason County Reformed Church in Scottville, and Trinity Evangelical Free Church in Ludington. Harvey is survived by his wife of 8 months, Penny Yost-Buter. He will also be dearly missed by his children, grandchildren, and great-grandchildren - Glen and Julie Buter of Wyoming (Andrew, Jana, Aiden, Lara, and Gerrit Buter; Erin, Matthew, Elizabeth and baby-to-be Eichhorn), Brian and Kathy Buter of Scottville (Karl, Kellia, Jenna and Aislynn Buter; Eric Buter and Jenni Herrema; Caryn Buter), Alan and Trena Buter of Grand Haven (Cory and Kristen Buter; Zachary Buter and Samantha Nichols), Gary and Marilyn Yost of Ludington (Dan and Kelly), Scott and Heather Yost of Wilmore, Kentucky (Nathan, Benjamin, and Natalie), as well as his sister Marilyn (Buter) Plummer, sister-in-law Minnie Buter, and brother and sister-in-law Bud and Luann Fisher, and many other nieces, nephews, relatives and friends. Harvey was preceded in death by his wife of 54 years, Carolyn (Palsrok) Buter, his parents, Henry and Irene Buter, and siblings Bernard, Geneva, Arthur, and Lester. A Celebration of Life service will be held for Harvey at 11:00 am on Monday, June 15 at the Mason County Reformed Church with Rev. Mick Sutton and Rev. Gary Ridley officiating. Friends may meet with Harvey’s family for a time of visitation on Sunday evening from 6:00-8:00 p.m., and on Monday morning from 10:00 –11:00 a.m. at the church. Those who wish to make contributions in Harvey’s memory are asked to consider Harbor Hospice or Covenant Christian School of Ludington.

Harvey Jay Buter, aged 78, of Ludington, went to his heavenly home on June 10, 2015. Harvey worked for years at Clark Floor Machine in Muskegon and Simonds Industries in Big Rapids before retiring to Scottville. Harvey was an antique car enthusiast,... View Obituary & Service Information

The family of Harvey J. Buter created this Life Tributes page to make it easy to share your memories.

Harvey Jay Buter, aged 78, of Ludington, went to his heavenly...

Send flowers to the Buter family.