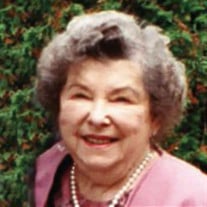 Helen Bernadette Gutowsky, aged 95 went to be with her Lord on Sunday, February 28, 2016 on her 95th birthday. Helen had a wonderful birthday party at the Newaygo Medical Care Facility in Fremont, and after all the guests left and with daughter Cindy by her side, she passed peacefully in her sleep. Helen had such an inner strength. Helen was born on February 28, 1921, the daughter of John and Nellie Long and grew up on the family farm in Irons with her sisters Mary, Julie, Anna, and Theresa, and her brothers Vince and Eddie. She would always share stories of the fun times growing up on the farm and sometimes the pranks they played on each other. In the mornings, before heading off to school, she often had to find the cows and return them to the yard. When she was 15, Helen went to work for Mr. & Mrs. Allen. They developed a very close and loving relationship and brought Helen along with them to Florida. Their friendship lasted until the Allen’s death. Helen married Willard Drilling and celebrated the birth of their daughters Crystal and Cindy. Through the years her sisters married and moved to Detroit but always maintained a very close relationship. Helen eventually went to work for Kaiser Displays, sewing the triangular banners that were flown at gas stations. She would always proudly point out that she had sewn them when passing stations. Earlier in her life, Helen had dated another Irons local man by the name of Frank “Spud” Gutowsky. After her marriage with Willard had ended, she and Spud rekindled their relationship and exchanged wedding vows on November 28, 1959 at St. Bernard Catholic Church. They, along with daughters Crystal and Cindy moved to Grand Rapids where Helen began working at Kelvinator, sewing car seat covers, a job she held until her retirement. Following Spud’s retirement, they returned to Irons and bought a home on the Little Manistee River. It was their paradise. Spud would fish and grow vegetables in his wonderful garden, and Helen would do a lot of canning from what he grew. Helen loved her home and was very proud of it. Her daughter Crystal would visit with her family from St. Louis, Missouri every summer and Cindy would come up from Croton with her family as well. Their families would have so much fun in river, loving every minute. She would make the grandkids her famous apple pancakes and banana splits, and treated everyone royally. As Spud fished for Blue Gills, Helen would fry them up for the best fish dinner ever. Many memories were made on her beloved home on the river. Helen and Spud enjoyed many trips to Las Vegas and played a lot of cards with their family and friends. They had so many childhood friends in Irons and as her sisters retired, they also moved back to the area, reuniting the family once again. Mom would like to thank each and everyone for being a special part of her life. She would not want anyone to grieve for her, but to enjoy life and take time for family and friends. Remember me when you are lonely or sad. Remember me and I will always be with you. Helen will be lovingly remembered by her daughters Crystal Forster of St. Louis, MO, and Cindy (Ed) Folkertsma of Croton Dam, her beloved grandchildren Todd Forster, Kelly (Skip) Forster Krysl, Bill (Carolyn) Forster, Cindy Soest, Terry Forster, Eddie Folkertsma, and Kendra (Rob) Dodge; her precious great-grandchildren Brandon and Trenton Forster, Austin and Nicole Soest, and Emersyn and Dawson Dodge; her sisters-in-law Vicki Kasper of Irons, Fran Scofield of California, Jayne Roti of St. Joseph, and Nessa Long of Fountain; and many nieces and nephews. Helen was preceded in death by her parents, her husband Frank, her sisters Julia Gutowsky, Mary Stovall, Anne Miller, and Theresa Bernier; and her brothers Edward and Vincent Long. The Mass of the Resurrection will be held for Helen at 11:00 am on Tuesday, March 8 at St. Bernard Catholic Church in Irons with Rev. Dennis O’Donnell presiding. Burial will take place at Lakeview Cemetery in Irons at a later date. Friends may meet with her family for a time of visitation on Monday evening from 6:00 – 8:00 pm at the church, where the Rosary will be prayed for Helen at 7:00 pm. Those who wish to remember Helen with a memorial contribution are asked to consider St. Bernard Catholic Church, or Little Mary’s Hospitality House in Wellston.

Helen Bernadette Gutowsky, aged 95 went to be with her Lord on Sunday, February 28, 2016 on her 95th birthday. Helen had a wonderful birthday party at the Newaygo Medical Care Facility in Fremont, and after all the guests left and with daughter... View Obituary & Service Information

The family of Helen Gutowsky created this Life Tributes page to make it easy to share your memories.

Helen Bernadette Gutowsky, aged 95 went to be with her Lord on...

Send flowers to the Gutowsky family.