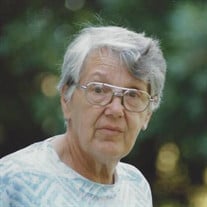 Henrietta M. “Hank” Turner, aged 92 of Fountain, passed away on Tuesday, October 14, 2014 at Spectrum Health Butterworth Hospital in Grand Rapids. Henrietta was born on February 24, 1922 in Concord, New York, the daughter of Martin E. and Irene M. (Mathers) Hoffman, and married Richard D. Turner on February 3, 1967 in Benton Harbor. They have celebrated 47 years together. “Hank” worked for the Bendix Corporation and for a Credit Union in St. Joseph, MI before she and Dick moved to Fountain, where she worked 17 years for Century Boats in Manistee until they closed. She loved to spend time fishing with Dick and her family, working in the garden, playing cards with her friends, or solving crossword puzzles. She was preceded in death by her parents and her brothers Ed, Ken, and Mike Hoffman. “Hank” will be lovingly remembered by her husband Dick, daughter Dawn Everette of Ludington, granddaughter Sienna Everette also of Ludington, her mother-in-law Dora D. Jones of Fountain, sisters Marj Roblee of Delevan, New York, Pat (Jerry) Lester of Freedom, New York, and Lori (Dan) Conroy of Ocala, Florida, brother Marty Hoffman of New York, brother-in-law Curtis Jones of Fountain, a special niece Julie of Benton Harbor, and many additional nieces and nephews. According to her wishes, cremation has taken place. There will be no visitation or funeral services at this time. Those who wish to make contributions in her memory may make them to a charity of the donor’s choice.

The family of Henrietta M. "Hank" Turner created this Life Tributes page to make it easy to share your memories.

Send flowers to the Turner family.