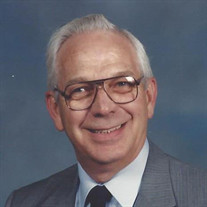 Henry John DeGood, aged 85 of Ludington, passed away on Friday, October 17, 2014. He was born on November 10, 1928 in Ada, Michigan, the son of John and Johanna (Beimers) DeGood, and graduated from Lowell High School. On August 6, 1949 he married Delores Mae Shears, and they have celebrated 65 years together. Henry’s life experiences included working for the Grand Trunk Railroad, Consumers Power Company (Consumer Energy), teaching for the Corunna Public Schools, and substitute teaching at Mason County Schools and West Shore Community College. He served his communities through enlisting in the National Guard, serving on the Volunteer Fire Department in Ada, Volunteering as an EMT with the Corunna Area Ambulance Service, held various leadership positions in the Boy Scouts of America, served the American Red Cross as an instructor in First Aid and CPR as well as being a prolific blood donor. He was also a charter member of the Corunna Lions Club, and served the City of Corunna as a councilman. He served his churches as both a Lay Leader and a Lay Speaker for the United Methodist Church, later he was a member of the Speakers Bureau and did Church World Service for the Reformed Church of America, and served the Mason County Reformed Church as both a Deacon and an Elder. His love of the smallest among us was evident in his long service to the MOPS program at Cornerstone Baptist Church in Ludington. In addition to his education at Lowell, Henry also attended Flint Junior College (Mott Community College), Michigan State University, and did graduate work at the University of Toledo. Henry leaves behind his wife Delores, two daughters Barbara A. (Robert Thompson) Powlison of Ludington, Donna S. (Paul) Martin of Fountain, two sons John L. (Linda) DeGood of Owosso, and David L. DeGood of Manistee. He leaves 19 grandchildren, 35 Great Grandchildren, and one great-great grandchild. He is survived by one brother Donald (Doris) DeGood of Cedar Springs, one sister Esther J. (DeGood) Beemer of Sand Lake, and one sister-in-law Marlene DeGood. He was predeceased by his parents John DeGood and Johanna (Beimers) DeGood, one brother James DeGood, a sister Esther M. DeGood, sister and brother-in-law Ruth Ann (Donald) Waller, brother-in-law Robert Peckham, daughter Melinda L. (DeGood) Kidd, granddaughter Tamara A. Powlison, great granddaughter Emily J. Powlison.

Henry John DeGood, aged 85 of Ludington, passed away on Friday, October 17, 2014. He was born on November 10, 1928 in Ada, Michigan, the son of John and Johanna (Beimers) DeGood, and graduated from Lowell High School. On August 6, 1949 he... View Obituary & Service Information

The family of Henry John DeGood created this Life Tributes page to make it easy to share your memories.

Henry John DeGood, aged 85 of Ludington, passed away on Friday,...

Send flowers to the DeGood family.