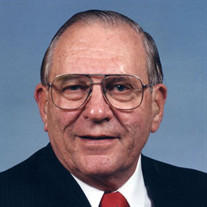 Herbert Budd Hall was born 20 March 1921 in his family home on the open prairie outside of Terry, Montana, to Herbert Henry Hall and Ruby M. (Thompson) Hall. When Budd was three years old his father passed away and was buried in Terry, Montana.... View Obituary & Service Information

The family of Herbert Budd Hall created this Life Tributes page to make it easy to share your memories.

Send flowers to the Hall family.