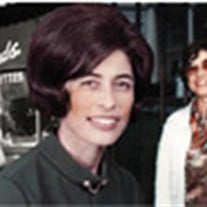 Herlinda Gonzalez was a wonderful woman, a woman completely devoted to the two most important things in life, her family and her faith. She was a loving wife, mother, and grandmother, and a loyal daughter, sister and friend. Most of all, Herlinda... View Obituary & Service Information

The family of Herlinda Daria Gonzalez created this Life Tributes page to make it easy to share your memories.

Herlinda Gonzalez was a wonderful woman, a woman completely devoted...

Send flowers to the Gonzalez family.