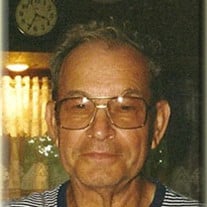 OBITUARY:Howard L. Badke, aged 86 of Custer, passed away on Tuesday, September 21, 2010 at Memorial Medical Center in Ludington. Howard was born on December 14, 1923 in Elkhart, Indiana to George and Fern (Smith) Badke, and graduated from Elkhart High School. He served his country with the United States Army during World War II, with tours of duty in Northern France and the Philippines. Following his discharge, he returned home to Elkhart where he met the love of his life, Marcia Engelbrecht. They were married on August 15, 1952 and were blessed to have celebrated 58 years together. Howard worked for many years as a supervisor for Alcona Mobile Home Manufacturing before retiring in 1986 to help his nephew start the Robert Miller Mobile Home Company. He also worked a short while for EPW Pattern Company in Elkhart. In 1992, he and Marcia moved to Custer, MI where he continued to keep himself busy working for Creative Co-Packaging in Scottville. He was a 50 year member of the Kane Masonic Lodge 183 in Elkhart where he was a 32nd Degree Mason; was a member of the Scottville Masonic Lodge 445; The Order of Eastern Stars; the Scottish Rite of South Bend; the York Rite Chapter 101 of Elkhart; and was a member of the American Legion Post 76 in Ludington, MI. He was also a member of Bethany Lutheran Church in Ludington. Howard loved to keep himself busy. He rode motorcycles all his life, and enjoyed being outdoors: hunting, fishing, and working in his garden. He loved his family, cherished his grandchildren, and was a role model of a husband and father. He was preceded in death by his parents, his brother Bernard, and his sisters Lois Peffly and Margaret Miller. Howard will be greatly missed by his wife Marcia; his son Kim Badke and his wife Elizabeth of Chassel, MI; his daughter Cindy Hopkins and her husband William of Scottville; his beloved grandchildren Angela and Brandon Badke, and Haley Hopkins; his brother-in-law Jim (Penny) Engelbrecht of Scottville; his sisters-in-law Mildred Joy Badke of Goshen, IN, and Phyllis Wahr of Scottville; and numerous nieces and nephews. Funeral services for Howard will be held at 11:00 AM on Saturday, September 25, 2010 at Bethany Lutheran Church in Ludington with his pastor, Rev. William Huether officiating. Interment will take place at Riverside Cemetery in Custer. The family will meet with friends from 7:00 to 9:00 PM on Friday at Stephens Funeral Home in Scottville. Those who wish may designate memorial contributions to Bethany Lutheran Church, Scottville Masonic Lodge 445 of the Order of the Eastern Stars Chapter 327.

OBITUARY:Howard L. Badke, aged 86 of Custer, passed away on Tuesday, September 21, 2010 at Memorial Medical Center in Ludington. Howard was born on December 14, 1923 in Elkhart, Indiana to George and Fern (Smith) Badke, and graduated from Elkhart... View Obituary & Service Information

The family of Howard LeRoy Badke created this Life Tributes page to make it easy to share your memories.

OBITUARY:Howard L. Badke, aged 86 of Custer, passed away on Tuesday,...

Send flowers to the Badke family.