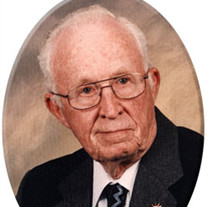 OBITUARY:Howard E. Cook Jr., aged 80 of Scottville, passed away on Tuesday, November 9, 2010 at his home surrounded by his loving children. Howard was born on March 2, 1930 in Bay City to Howard L. and Caroline (Groulx) Cook, graduated from Bay City All Saints High School and furthered his education at Saginaw Valley State University. He honorably served his country during the Korean Conflict with the United States Air Force. On August 1, 1955 he married Jane Marie VanTol at St. James Catholic Church in Bay City, and they celebrated 45 blessed years together before Jane preceded him in death on May 8, 2000. Howard was also preceded in death by his parents, and his sister Carol Oswald and her husband Gary. Howard served the area as a Game Warden for the DNR for 35 years, retiring in 1984, and was a longtime member of St. Simon Catholic Church in Ludington, and an active member of the Scottville Optimist Club where he could often be seen working Bingo on Wednesday afternoons. He was also a member of the Mason County Fin & Feather Club, and the Ludington Elks Club. Howard split his time between Scottville and Cascade, Montana always looking forward to and enjoying the ride back and forth. He was a woodworker and musician, playing various instruments, but mostly enjoyed playing the keyboard. As a former game warden, he enjoyed spending time outdoors, especially fishing. Howard will be greatly missed by his children Terry Cook of Branson, Missouri, Dale (Cindi) Cook of Rockford, Carol McDonald, and Karen (Curtis) Jolly all of Ludington, Thomas (Jodie) Cook of Cascade, Montana, and Thimothy (Dana) Cook of Free Soil; his beloved grandchildren Patrick, Jennifer, Tom, Matt, Nate, Melissa, Joey, Tyler, Morgan, Whitney, Jensen, and Carter; his precious great-grandchildren Emily, Olivia, Jennika, and Krcye; his brothers Thomas (Orpha) Cook of Sebastian, Florida, and Jerry (Maureen) Cook of Freeland, MI; and many nieces and nephews. The Mass of Christian Burial will be celebrated at 11:00 AM on Friday, November 12 at St. Simon Catholic Church with Rev. Thomas Schiller as celebrant. Burial will take place at Brookside Cemetery in Scottville. Friends may meet with his family for a time of visitation on Thursday evening from 7-9 PM at the Stephens Funeral Home in Scottville, where a scripture service will be held at 8:00 PM, and on Friday morning from 10:00 AM until time of mass at the church. Those who wish may make memorial contributions to the Mason County Fin and Feather Club, and the West Shore Hockey Association in Howard’s memory.

OBITUARY:Howard E. Cook Jr., aged 80 of Scottville, passed away on Tuesday, November 9, 2010 at his home surrounded by his loving children. Howard was born on March 2, 1930 in Bay City to Howard L. and Caroline (Groulx) Cook, graduated from... View Obituary & Service Information

The family of Howard Ernest Cook Jr. created this Life Tributes page to make it easy to share your memories.