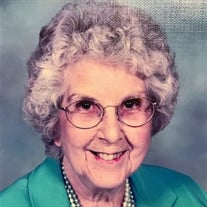 Io Lyene Stark aged 100 of Scottville passed away on Sunday, June 18, 2017 at Tendercare of Ludington. Io was born on June 7, 1917 in Sheridan Township, the daughter of David and Maude (Williams) Hughes. She grew up in the Ford Lake area alongside her sisters Evea, Viola, Ruth, and Irene, and her brother David. Io attended the Ford Lake School and Fountain High School. On March 27, 1936 she married John Jay Stark at the home of Rev. Fred Stewart in Fountain and they celebrated 56 years together before John preceded her in death in 1992. Io worked as a cleaning lady for several of her neighbors before working at Daley’s Freeze Plant on Millerton Road, at Stokely’s Bean Factory, and as a Seamstress at Glen of Michigan in Manistee. She and Jay farmed in the Fountain area for 25 years before moving to Scottville in 1967. Io was a longtime member of Fountain United Methodist Church before moving and transferring her membership to the Scottville United Methodist Church where she was an active member of the United Methodist Women. Io and Jay enjoyed dancing with the Belles and Beau’s Square Dance Club for many years and Io was also a member of the Clover Leaf Club in Fountain and the Scottville – Ludington Order of Eastern Stars Lodge 327. Along with her husband Jay, Io was preceded in death by her parents, her son-in-law Richard Shanks, her sisters Evea Morse, Viola Smith, Ruth Hughes, and Irene Rozell, and her brother David Hughes. Io will be lovingly remembered by her daughter Jeanette Shanks of Chicago; her son Kenneth Stark and wife Wilma of Scottville; her grandchildren Dana (Mike) Shanks-Albers, Richard (Lori) Shanks, Diane (Marco) Cavazzoni, Kimberly Stark, Kristy Stark, Kelly Stark, and Kevin Stark; her great-grandchildren Anna Kowalski, Jonathon Kowalski, Lauren Kowalski, Richard (Sabrina) Shoemake, Alex Cavazzoni, John Shanks, Ryen Varenhorst, Tyler Varenhorst, Danielle Stark, and Kylee Stark; her great, great-grandchildren Emma and Glen Williams; and many nieces, nephews, cousins, and dear friends made over a century of life. Funeral services will be held for Io at 2:00 pm on Saturday, June 24th at the Stephens Funeral Home – Wyman Funeral & Cremation Services in Scottville with Pastor Jan Obrien officiating. Burial will follow at Fountain Cemetery. Friends may meet with her family for a time of visitation on Friday evening from 6:00 – 8:00 pm at the funeral home with an Eastern Star Memorial Service held at 6:00 pm. Those who wish to remember Io with a memorial donation are asked to consider the Scottville Senior Center.

Io Lyene Stark aged 100 of Scottville passed away on Sunday, June 18, 2017 at Tendercare of Ludington. Io was born on June 7, 1917 in Sheridan Township, the daughter of David and Maude (Williams) Hughes. She grew up in the Ford Lake area alongside... View Obituary & Service Information

The family of Io Lyene Stark created this Life Tributes page to make it easy to share your memories.

Io Lyene Stark aged 100 of Scottville passed away on Sunday,...

Send flowers to the Stark family.