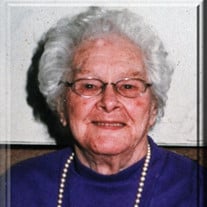 OBITUARY:Mrs. Iola Rosenow, age 91, of Tawas City, formerly of Victory Township, passed away on Tuesday, June 14, 2011. Iola was born November 24, 1919 in Custer Township to Clarence & Thelma (Fager) Miller, and graduated from Scottville High School in 1937. She attended Mason County Normal School and after completing her work there in 1939, went on to earn her Bachelor’s Degree from Central Michigan University. Iola taught in various rural schools throughout Mason County, beginning her career at Free Soil, then moving to Victory Schools. The largest share of her teaching was spent at Mason County Central Schools in the elementary as a 5th grade teacher, and for a time she served as the acting principal for all three elementary buildings. In 1980 Mrs. Rosenow retired from teaching after a career that spanned 38 years and countless students.On April 25, 1943, Iola wed John H. Rosenow and they spent forty years together in marriage, many of them working on their dairy farm in Victory Township. They enjoyed bowling together on a Saturday night league, and Iola was an avid reader in her spare time. She also enjoyed cooking, especially preparing family dinners. John preceded her in death on November 17, 1983. After his death, Iola looked for new things to do and became active in the Michigan Association of Retired School Personnel. She enjoyed some time traveling and served for many years as the treasurer of her church, Victory Trinity Lutheran. She was also preceded in death by her son Dennis in 1983, her grandson Brian Tungl, brother Rolland Miller and sisters June Chilberg and Irene Hansen.Iola will be remembered by her son Robert & his wife LaWana of Prescott, MI, daughter-in-law Pam (John) Tungl of Farmington Hills, her grandchildren, Tate (Jill) Tungl of Colorado, Tricia McLean of Prescott, Robert (Karen) Rosenow, Jr. of Los Angeles, and Johnene Tungl of Denver; her great grandchildren Cayden Rosenow and Maddie Tungl, as well as her sister-in-law Carol Rosenow of Lansing.Funeral services for Mrs. Rosenow will be held at 11:00 am on Monday, June 20, 2011 at Victory Trinity Lutheran Church with her pastor, Rev. William Heuther officiating. Her family will meet with friends on Sunday from 5 pm to 8 pm at Stephens Funeral Home in Scottville for a time of visitation, as well as on Monday at the Church from 10 am until the time of the service. Interment will follow at South Victory Cemetery with a meal following at Victory Township Hall. Those who wish to make memorial contributions are asked to consider Victory Trinity Lutheran Church.

The family of Iola Rosenow created this Life Tributes page to make it easy to share your memories.

Send flowers to the Rosenow family.