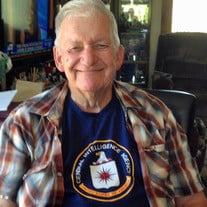 Jack William Greiner aged 87 of Scottville passed away on Wednesday, May 29, 2019 at his home after spending a beautiful sunny day doing the things he enjoyed outside like mowing his lawn and cutting wood. Jack was born on November 5, 1931 in Hart, the son of William and Louise Jacqueline (Carclay) Greiner, and graduated from Hart High School with the class of 1949. Jack was raised by his grandparents William S. and Magdalene Greiner, as his mother Louise died shortly after he was born. Jack served his country with the United States Army during the Korean Conflict and on November 21, 1953 he married his soul mate, Jeanette M. McDonald. They celebrated 61 wonderful years by each other's side until Jeanette preceded Jack in death on February 6, 2015. Jack was also preceded in death by his son Wayne Greiner, his parents and his grandparents. Jack and Jeanette operated Carpets of America in Scottville and Ludington for many years and loved to travel, especially to Texas where they chose to live for a short time. As a member of St. Mary's Catholic Church in Custer, Jack's faith was very important to him. He prayed the Rosary several times each day and deeply cared for his family. He loved spending time outdoors working in his yard and kept himself young cutting wood every day to sell by the roadside. He donated the earnings to Alzheimer's Research hoping he would see a cure in his lifetime after watching his beloved Jeanette suffer from the disease. Jack was also a member of the Custer Gold Bar VFW Post 5096. Jack will be greatly missed by his daughter Victoria and Rocky Sorensen, and his son Steve Greiner all of Scottville; his granddaughter Jackie Sorensen of Scottville, his grandson Reuben and Sarah Sorensen and their son Jack of Alexandria, VA. The Mass of Christian Burial will be celebrated at 11:00 am on Saturday, June 1 at St. Mary's Catholic Church in Custer with Rev. Daniel DePew as celebrant. Burial will follow at St. Mary's Cemetery. Friends may meet with his family for a time of visitation on Friday evening at the church from 6:00 - 8:00 PM. The Rosary will be prayed for Jack at 7:30 PM. Those who wish to remember Jack with a memorial donation are asked to consider St. Mary's Catholic Church or the Alzheimer's Association.

Jack William Greiner aged 87 of Scottville passed away on Wednesday, May 29, 2019 at his home after spending a beautiful sunny day doing the things he enjoyed outside like mowing his lawn and cutting wood. Jack was born on November 5, 1931... View Obituary & Service Information

The family of Jack William Greiner created this Life Tributes page to make it easy to share your memories.

Jack William Greiner aged 87 of Scottville passed away on Wednesday,...

Send flowers to the Greiner family.