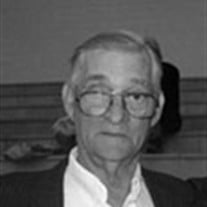 Jim “The Eye” Allen, aged 72, of Scottville passed away Wednesday, January 30, 2008 at Memorial Medical Center in Ludington. Jim was born March 11, 1935 in Jackson, Michigan to Cliffton and Beulah Allen, the youngest of three children, married Wilma Burch on January 15, 1955. They moved to Mason County in 1971, where Jim worked for both Goodyear and James Tire in Ludington for over 40 years, which made him the local expert on tires, as well as earning him the affectionate nickname “Papa Tire” by his grandchildren.Jim was an incredibly caring and loving husband, father, grandfather and friend, who spent much of his time fishing with friends Ron Wilson, Tom Petersen, as well as Russ and Paula, good friends from Fremont. If you couldn’t find Jim at the river fishing, he could always be found sitting down the first base line watching softball, or on the sidelines watching one his grandchildren participate in a sporting event. Jim will be greatly missed by his family and friends.He will be greatly missed by his wife of 53 years, Wilma, his children Renia (Kevin) Pritchard, Denise (John) Oliver, Jim (Amanda) Allen, and Lisa (Jim) Stankowski. His grandchildren Melissa DeRooy, Amanda (Rusty) Merkey, Scott (Jess) Oliver, Nathan Oliver, Nicholas, Jessica and Rachel Allen, Blake and Kalee Stankowski; brother Bob (Carol) Allen and sister Betty (John) Stevens and his faithful dog Bubba.Friends may meet with Jim’s family for a time of visitation and sharing on Sunday afternoon from 2:00 - 4:00 PM at the Stephens Funeral Home in Scottville. There will be no funeral services for Jim. Those who wish are asked to make memorial contributions to his family, with envelopes available at the funeral home. Please visit Jim’s personal memory page at www.stephensfuneralhome.net to sign the online guestbook, or to leave your favorite memory of Jim for his family. Funeral arrangements are being cared for by the Wyman Funeral & Cremation Services ~ Stephens Funeral Home in Scottville.

The family of James Edward Allen created this Life Tributes page to make it easy to share your memories.

Jim “The Eye” Allen, aged 72, of Scottville passed away Wednesday,...

Send flowers to the Allen family.