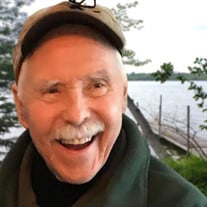 James A. Christensen aged 83 of Fountain passed away on October 30, 2020 at his home on Round Lake. The son of Arne and Eleanor (Henkel) Christensen, Jim was born on September 20, 1937 in Scottville at his parents business - Christensen's Beer Parlor & Restaurant. He attended Scottville High School graduating with the class of 1955 and furthered his education at Ferris State University, graduating in 1962 with a Bachelor Degree in Business Administration. He earned his Master’s Degree from Michigan State University in 1963 and his Doctorate in Business Administration with emphasis in Marketing in 1965. Jim taught business courses at Kalamazoo Central, Portage Central, and for Grand Rapids Central High Schools, and taught Marketing at Delta College, Central Michigan University, and Saginaw Valley State University. He also represented Michigan State University throughout the Thumb area of Michigan. During his career, Jim was recognized as an Honored Alumni for Alpha Sigma Phi, and served many different organizations on a national level holding various offices. He contracted with Polaroid to developed marketing programs; and with Wicks Lumber to develop management training programs on behalf of MSU. He was very proud of developing the protocols Wicks Lumber would use for storing materials in caves in third-world countries. In his retirement, he worked as a Courier for West Shore Bank. Proud of his Mason County roots, Jim volunteered countless hours for Big Brother, over 30 years for the American Red Cross, and was a Life Member of the Scottville Optimist Club where he was awarded Optimist of the Year in 2000. At the Optimist Club, he was the self-proclaimed “Supply Sergeant” as he was responsible for obtaining products for the Popcorn Wagon and Harvest Festival Brat Tent every year. He also helped out at Bingo and many of the club’s events. Jim was always willing to help out in any way he could. Jim loved to get together with friends, usually playing Setback at either the Optimist Club or at the Danish Brotherhood hall in Ludington, as he was proud of his Danish heritage. Jim will be greatly missed by his children Amy (Carl) Burton, Karen (Shaun Nimtz) Babcock, and Tracey (Steve) Tomaszewski; his grandchildren Brandi (Justin) Lampman, Gary (Tabitha) Babcock, Jim (Matt McCoy) Babcock, Brendan Burton, LeAnne (Jack) Bice, Josh (Katie) Tomaszewski, and Zach (Haley) Tomaszewski; his great-grandchildren Eleanora Lampman, Sullivan Lampman, Emma Babcock, and Sophie Babcock; his sisters Dian Eggert, and Jan (Jerry) Sparks; along with many nieces and nephews. Jim was preceded in death by his wife Norma; and his parents Arne and Eleanor Christensen; and was recently joined in death by his sister Darlene Bettison. A service to celebrate Jim's life will be held at 11:00 am on Saturday, August 21 at Our Savior Lutheran Church in Scottville with Rev. James Schroeder officiating. Jim will be buried at Brookside Cemetery in Scottville. Friends may meet with his family prior to the services on Saturday morning from 10:00 - 11:00 am at the church. Those who wish to remember Jim with a memorial donation are asked to please consider the American Red Cross, or Scottville Optimist Club.

James A. Christensen aged 83 of Fountain passed away on October 30, 2020 at his home on Round Lake. The son of Arne and Eleanor (Henkel) Christensen, Jim was born on September 20, 1937 in Scottville at his parents business - Christensen's Beer... View Obituary & Service Information

The family of James "Jim" Christensen created this Life Tributes page to make it easy to share your memories.

James A. Christensen aged 83 of Fountain passed away on October...

Send flowers to the Christensen family.