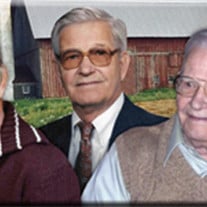 JIM'S LIFE STORY:Jim Dobias was a man of many talents, ranging from dairy farming and accordion playing, to bowling and square dancing. His greatest talent, however, was his ability to connect with other people. Whether it was with a thoughtful... View Obituary & Service Information

The family of James Charles Dobias created this Life Tributes page to make it easy to share your memories.

JIM&#39;S LIFE STORY:Jim Dobias was a man of many talents, ranging...

Send flowers to the Dobias family.