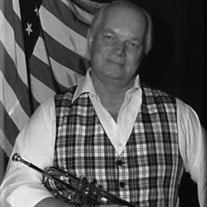 H. James “Jim” Fitch aged 87 of Ludington, formerly a longtime resident of Scottville, passed away on Monday, September 21, 2020 at Spectrum Health Ludington Hospital. Jim was born on March 4, 1933 at Paulina Stearns Hospital in Ludington, the son of Harold O. and Frances M. (Conrad) Fitch and grew up on the family fruit farm in Summit Township. Jim graduated from Ludington High School with the class of 1951 and attended Michigan State University pursuing a degree in Agricultural Studies. On June 28, 1952 he married Carol L. Chilberg in Ludington and they have celebrated 68 years together. Jim loved to play his trumpet and has been involved with music most of his life. While playing in the Ludington High School band he was recruited by his instructor Mr. Peterson and Ray Schulte to join the Scottville Clown Band and became the youngest member of the “Class of 1947.” Jim was often featured with trumpet solos during Clown Band concerts which always followed the parades. He also played with the Salt City Dixieland Band, the Pentwater Civic Band, and the West Shore Community College Concert Band. Jim had two different career paths throughout his life, as a fruit farmer in Summit and Amber Township, and as an Insurance Salesman for Farm Bureau Insurance in Scottville. Jim operated his family’s farm in Summit Township and later purchased the Chilberg family farm in Amber Township. They harvested Cherries, Apples, Peaches, Plums, and Pears for over 25 years before starting his 2nd career in Insurance, which he also served for over 25 years. Jim and Carol were members of Our Savior Lutheran Church in Scottville, and Mason County Farm Bureau which Jim formerly served as President. In his retirement, Jim maintained a woodworking shop in their home northeast of Scottville, and he and Carol enjoyed spending half of the year at their home in Florida where Jim was involved with several bands & orchestra’s and led a hymn sing in the park where they lived. They also looked forward to getting together with friends and family to play Setback and Pinochle as often as possible. Jim was preceded in death by his parents, his sons Daniel James in 1998 and John Wayne in 1987, his young brother Michael, his sister Mary Kaiser, and Carol’s brothers and sisters Karl, Wayne, and John Chilberg, and Marie Squires. Jim will be greatly missed by his wife Carol; his daughter Mari-Kae (Butch) Sterley of Ludington; 11 grandchildren; 25 great-grandchildren; 3 great, great-grandchildren; his sisters Ruth Orr of Coopersville, Grace Margaret (Richard) Christensen of Ringgold, GA, and Kathy Falor of Kalamazoo; along with many nieces, nephews, cousins, and great friends. A memorial service will be held for Jim at 2:00 pm on Saturday, October 3 at Our Savior Lutheran Church in Scottville. Friends may gather with his family at the church beginning at 1:00 pm until time of services. Those attending are asked to please wear a mask while inside the church and practice social distancing protocols. Those who wish to remember Jim with a memorial contribution are asked to consider Our Savior Lutheran Church, or the Raymond J. Schulte Music Education Scholarship Fund.

The family of James "Jim" Fitch created this Life Tributes page to make it easy to share your memories.

Send flowers to the Fitch family.