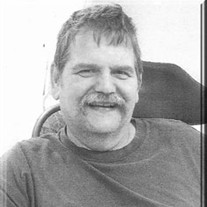 Obituary for James:James Robert Guetlech, age 60, son of the late Robert and Vera Guetlech passed over October 29, 2012, to be in paradise with the Lord Jesus. James, being a life long member of St. John’s Lutheran Church of Berne, attended Berne Lutheran grade school, and graduated from Elkton- Pigeon- Bayport High School in 1970. From Sept. 1971 until Sept 1975 Jim proudly served his Country as a United States Marine. James, left boot camp 2 weeks behind his platoon, as he was requested to stay behind to teach M-16 shooting to the next group of recruits. He served his final post at Camp New River near Jacksonville, N.C. as a member of HMH-362, the Ugly Angels, working as a CH-53 (Helicopters) Mechanic. He earned his final rank of Corporal, having refused the rank of Sgt. Twice, as he would always say; he did not want to be the boss of any one. James married Bonnie Mae Myers Meier on Sept.19, 1981, and they lived in Pennsylvania for twenty years, caring for Bonnie’s ill Father and later her Mother. While there, James attended Manor United Methodist Church, where he found many new friends, was considered an Associate Member, and served on several boards. In 2000, James and his family moved to Irons, Michigan so that James might take care of his father who had suffered a stroke. He took over his Father’s small business of Guetlech’s Jungle Haven Resort on Sauble Lake in Lake County. He continued to over see operations and take part in the daily chores with the help of his wife and son until his disabilities no longer permitted. Together James and Bonnie had one son Robert Edwin Guetlech. James was preceded in death by both his parents and his younger sister Mary Beth Guetlech. For those of us mourning the passing of James, no doubt his dry wit and ability to carry on a lively debate on a variety of subjects will be remembered. His wife and son will especially remember, if you did not really want to know something, don’t ask, because answers were often in detail. James had very kind heart, even helping more than once a person he was not really that fond of. James’s growing up on the family dairy farm was always full of stories, and became a great animal lover. For many he will be thought of with a St. Bernard by his side and a small dog on his lap. James had a lengthy illness; we thank God for knowing him, but are thankful he can rest now in the peace of the Lord. A Memorial Service will be held for James at a later date by his family and friends.

Obituary for James:James Robert Guetlech, age 60, son of the late Robert and Vera Guetlech passed over October 29, 2012, to be in paradise with the Lord Jesus. James, being a life long member of St. John&#8217;s Lutheran Church of Berne, attended... View Obituary & Service Information

The family of James Robert Guetlech created this Life Tributes page to make it easy to share your memories.

Send flowers to the Guetlech family.