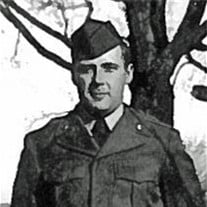 James Ivan Miller aged 88 of Scottville passed away peacefully on Thursday, October 19, 2017. James was born on February 25, 1929 in Petoskey, the son of Frank and Frances (Tyndall) Miller and attended Scottville High School. He served his country with the United States Army during the Korean Conflict. James worked many years as Maintenance Supervisor for Stokely Van Camp’s in Scottville and also for the Mason County Road Commission until retiring to care for his aging parents. He was a simple, basic man who placed high value on hard work, honesty, and family. james loved spending time with his family and friends, teasing his grandchildren and keeping his children on their toes. A true friend, he was always willing to lend a hand to anyone as his heart was pure gold. He was the sweetest man ever and his quick wit and wry sense of humor with be greatly missed. Along with his parents, James was preceded in death by his sisters Mable Tallquist, Carol Miller, and Vera Peterson, and his brother Robert Miller. James will be lovingly remembered by his children Betty Bauer and husband Bob of Scottville, Annette Newhouse and husband Steven of Gastra, MI, and Mark Miller of Scottville, his brother Ken Miller of Pentwater, his sister Joyce Balke and husband Jim of Jenison, many grandchildren, great-grandchildren, and great, great-grandchildren Funeral services will be held for James at 1:00 pm on Saturday, October 28 at Wyman Funeral & Cremation Services – Stephens Funeral Home in Scottville. Burial will follow at McCumber Cemetery in Branch. Friends may meet with his family during a time of visitation on Saturday from 12:00 noon until time of services at the funeral home.

James Ivan Miller aged 88 of Scottville passed away peacefully on Thursday, October 19, 2017. James was born on February 25, 1929 in Petoskey, the son of Frank and Frances (Tyndall) Miller and attended Scottville High School. He served his... View Obituary & Service Information

The family of James Ivan Miller created this Life Tributes page to make it easy to share your memories.

Send flowers to the Miller family.