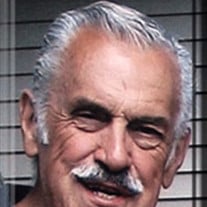 James Earl Spencer, aged 68 of Branch, went to be with his Lord on Tuesday, September 15, 2009 at his home. Jim was born on March 17, 1941 in Sturgis, Michigan to Walter James “Nick” and Alta Mae (Whitehead) Spencer, and graduated from Union City High School with the class of 1959. On October 5, 1963 he married Virginia Barber at the Union City Congregation Church, and they have celebrated 46 wonderful years together. Jim worked for the Village of Union City Public Works Department from the day he graduated high school, until his retirement on January 1, 1999. He and Virginia moved to Branch following his retirement and have enjoyed many outdoor activities including hunting, fishing, snowmobiling, and boating. Jim also loved raising many animals on their farm, and had a great sense of adventure, especially when it came to farming. His family and friends will remember him as a man of great character and faith. He leaves behind his wife Virginia, his son Robert and Korrina Spencer of Branch; his daughter Leanne and Chad Heuer of Marshall; his beloved grandchildren Brittney and Chelsea Mack, Kaylea, Kinzie, Hunter, and Fischer Spencer; his sisters Suzanne Jenkins of Union City, and Cindy and Russell Vogel of Lakeland, Florida; his nephew James Jackson of Battle Creek; and his nieces Nicole Johansson of Coconut Creek, Florida, and Danielle Knowles of Cordova, Tennessee. He was preceded in death by his parents. Jim and Virginia were members of the Bachelor Evangelical Covenant Church in Fountain where services will be held on Saturday, September 19 at 1:00 PM with his pastors Norm Letsinger, and Leo Anderson officiating. Burial will follow at Bachelor Cemetery. Friends may meet with his family for a time of visitation on Saturday from 11:00 AM until time of services at the church.

The family of James Earl Spencer created this Life Tributes page to make it easy to share your memories.

James Earl Spencer, aged 68 of Branch, went to be with his Lord...

Send flowers to the Spencer family.