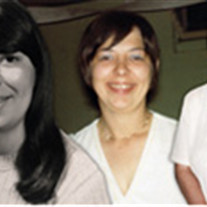 Janet Bennett was a woman with an amazing heart. The type of person who would do anything for her family and friends, she made her family her life&#8217;s work. Janet&#8217;s personality shone like the sun &#8211; warm and compassionate for... View Obituary & Service Information

The family of Janet Lynn Bennett created this Life Tributes page to make it easy to share your memories.

Janet Bennett was a woman with an amazing heart. The type of...

Send flowers to the Bennett family.