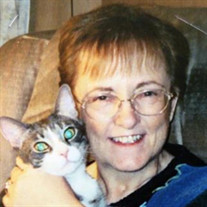 Janet Lynne O’Brien, “Pastor Jan”, aged 74 of Ludington passed away on Saturday, March 26, 2022 surrounded by her family. Jan was born on March 14, 1948 in Ludington, the daughter of George Wesley and Betty Marie (Rhinebolt) Billings and graduated from Mason County Central High School with the class of 1966. On June 24, 1967 she married Danny L. O’Brien and they celebrated 53 years together until Danny preceded her in death on October 27, 2020. Jan was also preceded in death by her father George, her son Shawn O’Brien, her daughter-in-law Marcey O’Brien, her grandsons Tristan Miller and Gage Cole, her brother Gary Billings, and her brother-in-law Dick Carstens. Jan attended Western Michigan University before graduating from the Bronson School of Nursing. She began working as a Licensed Practical Nurse at Baywood Nursing Home in Ludington before working as a Bookkeeper for NFO Acres Cooperative in Scottville for several years. After raising their 6 children, Jan returned to college where she earned her Bachelor’s Degree from Spring Arbor College in 2003 and began working towards her Master’s Degree. Jan heard the call into ministry shortly after and became a local licensed Pastor in the United Methodist Church, serving as Pastor of the Fountain and Free Soil parishes for a few years before assisting at Scottville United Methodist Church - where she and Danny were longtime members. Jan will be greatly missed by her children Shannon (Matt) Miller, Donald O’Brien, Jeremy O’Brien, Joshua (Jenn) O’Brien, and Amanda (Scott) Cole; her daughter-in-law Mary O’Brien; her grandchildren Emerald O’Brien, Catherine O’Brien, Jago O’Brien, Rodney (Rachel) Miller, Judith Miller, Isabell O’Brien, Gabriel Cole, Makayla Cole, and Callen Cole; her Mother Betty Billings of Ludington; and her sister Judy Carstens. A ceremony to celebrate Jan’s Life and Ministry will be held at 11:00 am on Saturday, April 30 at the Scottville United Methodist Church with Rev. Rick Hodgeson officiating. Burial will take place for Jan and Danny at Rickey Cemetery. Friends may visit with her family on Saturday morning from 10:00 – 11:00 am at the church. Those who wish to remember Jan with a memorial donation are asked to please consider the Scottville United Methodist Church.

The family of Janet Lynne O'Brien created this Life Tributes page to make it easy to share your memories.

Send flowers to the O'Brien family.