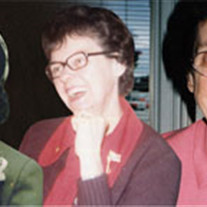 The Encarta Dictionary defines being selfless as thinking of others first, of putting other people’s needs, interests, or wishes before your own and this word precisely paints the picture of Jean Bentz, and the life she aimed to live each and every day. She was a woman whose greatest treasure was her family and she framed her every thought, her every word, and her every deed in reference to the Christian beliefs embedded in her heart.In Ashtabula, Ohio on June 23, 1923, Mary Asuma welcomed into her life a beautiful baby girl she named Jean Marie. Tragedy struck when Jean was only three with the death of her mother. She lived for a time with her beloved aunt, Sadie Asuma, and then was later adopted by her uncle, John Asuma. John and his wife Julia raised Jean in a loving home. They moved their family to Ludington when John became captain of the City of Midland Car Ferry. Jean took great pride in his work on the car ferries and had a great love for the warm home Julia made for them on North Lewis Street. Jean’s younger years had a profound impact on her entire life. It shaped the way she chose to live her life, and gave her the desire and ability to harbor a deep love for every child that entered that life.Upon completion of her education, Jean moved to Chicago with her best friend, Ann, where she worked in a war factory for a couple of years and then returned to Ludington. Jean found work at Montgomery Ward, unknowingly setting the stage for a romance to blossom. A charming young serviceman, Raymond Bentz, had just returned from the service and he knew of Jean through mutual friends. He came to Montgomery Ward to meet her and strike up a conversation, and that he did. It wasn’t long before the two developed a relationship and had fallen deeply in love. They were united in marriage on October 19, 1946, at Bethany Lutheran Church and their enduring love has continued on for 63 years.Ray and Jean built their first home together on Sixth Street in Ludington’s Fourth Ward and raised their children Dennis and Peggy. In 1956, they moved and built their second home together on South Quarterline Road in Scottville, where they welcomed their daughter Brenda to their family. To this day that home is their pride and joy. Together their family made precious memories when they traveled back to Ohio to visit Jean’s beloved and welcoming family. Vacations every summer were often spent in their Shasta travel trailer touring the country, visiting almost every state over the years. The trips were always marked with Jean’s egg-salad sandwiches and Hawaiian Punch picnics eaten along the way, with Jean always making sure that her family was well-fed. One of the more memorable trips was to Washington D.C. where Raymond, desiring to save a bit of money, required that his family walk all over the city to take in the sights. They endured long lines and sweltering heat, leaving their girls complaining of aching legs, but Jean took it all in stride.Jean was a remarkable woman with many treasured attributes. Faith was of the utmost importance to Jean and her quiet examples spoke volumes. Jean was always actively involved at her church, Bethany Lutheran, where she taught Sunday school and served as the superintendent for over 30 years. She delighted in her grandchildren; her angels who could do no wrong in her eyes. Jean loved each of them for the unique treasure that they were and times when the grandchildren came to stay were laced with traditions and dear memories that will be forever cherished. Jean kept lists of things that her grandchildren liked and shopped throughout the year so she could surprise them when they came. Jean was a talented cook, known especially for her meatballs and she often found ways to sneak vegetables into the meal so her grandchildren received a balanced meal. She was a great bowler and consistently bowled games that were in the high 200s, and once achieving the perfect 300. Jean truly loved being a part of the Bentz family and their Sunday gatherings to play pinochle were among her favorite times.Jean Bentz was a very thrifty woman with snappy sayings for numerous occasions including “waste not, want not” and “the squeaky wheel gets the oil.” She never complained about anything, even when she had great reason to do so. In everything she did, Jean carried herself with grace and compassion for others. She had a tender heart and an unwavering faith that sustained her through both the joys and sorrows along life’s journey. Jean leaves behind a rich tapestry of memories and a legacy of faith and love that will surely withstand the test of time.Jean Bentz, a true angel here on earth, passed from this world to be with her Lord on May 27, 2009. She will be greatly missed by her husband Raymond, her son, Dennis (Roz) Bentz of Dearborn and grandchildren Kelly Bentz, Kerry (Billy) Stevenson, Kevin (Michelle) Bentz and Alex Bentz; her daughter Peggy Jo (Ronnie) Little of Ocala, FL and grandchildren Ryon Little, Rachael (Robert) Ballou and Raymond (Jessie) Little; and her daughter Brenda (Matthew) Knizacky of Scottville, and grandchildren John (Kristy) Fay, Cathy (Mathew) Kailing, Joseph (Heidi) Knizacky, Rebecca (Sean) Lemon, and Matthew Knizacky. She is also survived by her great grandchildren Jordan Stevenson; Jacob Moon; Zachary, Riley and Max Bentz; Jax Bentz; Jack and Samantha Little; Kiersten and Johnathon Ballou; R.J., Ryon, Rayanne and Rayna Little; Cody and Connor Kailing; Abby Fay, and Lilliana Knizacky; her beloved brother and sisters-in-law Wilbur (Jean) Bentz, Joyce Mathews and Lucille Bentz; numerous nieces, nephews and cousins, as well as her family in Ohio Ed Chiaramonte and daughters Cheryl and Debbie. She was preceded in death by her parents John and Julia Asuma, her beloved son-in-law Larry Fay, and her wonderful cousin Norma Chiaramonte.

The Encarta Dictionary defines being selfless as thinking of others first, of putting other people&#8217;s needs, interests, or wishes before your own and this word precisely paints the picture of Jean Bentz, and the life she aimed to live each... View Obituary & Service Information

The family of Jean Marie Bentz created this Life Tributes page to make it easy to share your memories.

The Encarta Dictionary defines being selfless as thinking of...

Send flowers to the Bentz family.