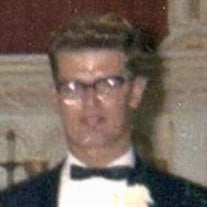 Jerry Fredric Fenner aged 83 of Fountain passed away on Thursday, January 27, 2022. Jerry was born on August 28, 1938 just north of Scottville, the son of Stirling and Ida (Sterling) Fenner, and graduated from Free Soil High School with the class of 1957. Jerry was first married to Mary Grace Morong and their marriage brought children Mary Grace, Jerome, Susan, and Bill into their family before Mary Grace preceded him in death in 1962. On October 3, 1964, Jerry married Katherine M. Thompson at St. Mary’s Catholic Church in Custer and their marriage brought three more children Connie, Tami, and Beth into the family. Jerry worked as a carpenter, retiring from the Carpenters Union after many years of service. He enjoyed spending time with his many friends and often could be found helping out at both St. John’s Cantius and St. Mary’s Catholic Churches - where he was a member of both parishes. He was also a faithful member of the Knights of Columbus Pere Marquette Council 1492 in Ludington. Jerry always loved to spend time fishing in the summer and winter months, hunting, and especially turtle hunting with his family and friends. The annual turtle fry following a successful hunt with his companions was always the highlight of his year. One of the areas Jerry found great satisfaction was being able to help people in need anonymously, never seeking recognition but the knowledge he was able to help others in his community. Jerry will be greatly missed by his wife Kathy; his children Mary Grace (Gerry) Lee, Susan (Scott) Khun, Bill (Doreen) Fenner, Connie Miller, Tami (Rick) LeClair, and Beth Fenner; 16 grandchildren; 19 great-grandchildren; his brothers and sisters Sandy (Gary) Lange, Nancy McDiarmid, and Dan (Gretchen) Fenner; his sister-in-law Jo Fenner, and numerous nieces and nephews. Along with his first wife Mary Grace, Jerry was also preceded in death by his parents Stirling and Ida Fenner; his son Jerome Fenner, his sons-in-law Dan Miller and Tom Hibbard, his brothers Stirling Jr. and Phillip Fenner, and his brother-in-law Don McDiarmid. Jerry loved all his children, grandchildren, and great-grandchildren and was very proud of his large family. The Mass of Christian Burial will be celebrated for Jerry at 11:00 am on Saturday, February 5 at St. John Cantius Catholic Church with his friend, Rev. Dennis O’Donnell presider. Burial for Jerry will take place later in the summer. Friends may gather with Jerry’s family for a time of visitation on Saturday morning from 10:00 am until time of Mass at St. John’s church. Those who wish to remember Jerry with a memorial donation are asked to please consider St. John Cantius Catholic Church of the Knights of Columbus PM Chapter 1492.

Jerry Fredric Fenner aged 83 of Fountain passed away on Thursday, January 27, 2022. Jerry was born on August 28, 1938 just north of Scottville, the son of Stirling and Ida (Sterling) Fenner, and graduated from Free Soil High School with the... View Obituary & Service Information

The family of Jerry F. Fenner created this Life Tributes page to make it easy to share your memories.

Jerry Fredric Fenner aged 83 of Fountain passed away on Thursday,...

Send flowers to the Fenner family.