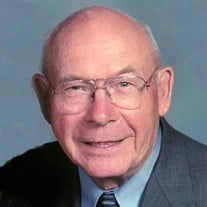 James "Jim" C. Schwass aged 89 of Scottville went to be with his Lord and Savior on Saturday, February 23, 2019. Jim was born June 22, 1929 in Ludington, MI the son of Carl and Dyveka Schwass and raised on the family farm in Riverton Township, south of Scottville. His early years were spent working on the farm, which was then known as Springdale Silver Fox Farms. After his father sold the fox they raised, the farm’s name was changed to Springdale Farms and focused on dairy farming. Jim attended a one room schoolhouse in East Riverton before attending Scottville High School, graduating in 1947. Following graduation He enrolled in the agriculture two-year short course at Michigan State College where he would meet his beloved wife Alice. They married on August 26, 1950 at St. Paul Lutheran Church at Holy Corners in Caledonia MI, and together ran the family dairy farm with Jim being the fourth generation to work on the farm. At the time of his retirement, the fifth generation, his sons Ron and Bill took over operation of the farm with Jim’s continued oversight and guidance. During the course of his lifetime, Jim was the recipient of The Goodyear Tire & Rubber Company Outstanding Conservation Farmer award, the MSU Outstanding Achievement in Agriculture Award, and Volunteer of the Year at White Pine Village. In 1957 Jim and Alice were named the Outstanding Young Dairy couple for the State of Michigan. Jim was a member of the American Guernsey Cattle Club, Michigan Artificial Breeders Co-op, and Michigan Milk Producers Assoc. He also served as a Director on the boards of the Mason Co. Jr. Farm Bureau, Mason Co. Farm Bureau, Mason- Lake Soil Conservation District, Mason Co. DHIA, MSU Short Course Alumni Advisory, West Shore Bank, and as Chairman for the Mason Co. Historical Society. Jim was a Charter member of Our Savior Lutheran Church in Scottville where over the years he served as church Trustee, Treasurer, Stewardship, on the Evangelism committee, and as Secretary and Chairman of the congregation. Jim will be lovingly remembered by his five children Lesa (Jim) Blaser of Minneapolis, MN; Marcie (Arlen) McCloskey, Ronald (Constance) Schwass, William (Veronica) Schwass, all of Scottville; and Julie (Anthony) DeVecht of Grand Haven. He will also be greatly missed by his 14 grandchildren, Aaron Blaser, Ross McCloskey, Stacey (Tobias) Scouten, Trent (Shayna) and Riley McCloskey, Katherine, Lee (Molly), Lucas, and MaKenna Schwass, Levi and Jocee Schwass, Aris and Hannah DeVecht; his 12 great-grandchildren Logan and Gabrielle McCloskey, Jonah, Isabelle, Isaiah and Isaac Scouten, Tegan, Lexi , and Max McCloskey, Eliza, Conrad and Hazel Schwass, along with several nieces, nephews, and cousins. Jim was preceded in death by his wife of 65 years Alice, his parents Carl and Dyveka Schwass, an infant sister Marjorie, his mother-in-law Henrietta Peters, and brother-in-law Clyde Peters. Funeral Services will be held for Jim at 11:00 a.m. on Friday, March 15 at Our Savior Lutheran Church in Scottville with his pastor, Rev. James Schroeder officiating. Burial will take place at Center Riverton Cemetery later in the spring. Friends may meet with the family for a time of visitation on Thursday evening from 6:00 to 8:00 p.m. at Wyman Funeral and Cremation Services - Stephens Funeral Home in Scottville, and on Friday morning from 10:00 a.m. until time of services at the church. Those who wish to remember Jim with a memorial donation are asked to consider Harbor Hospice, the Mayo Clinic, or Our Savior Lutheran Church Mission Fund.

James "Jim" C. Schwass aged 89 of Scottville went to be with his Lord and Savior on Saturday, February 23, 2019. Jim was born June 22, 1929 in Ludington, MI the son of Carl and Dyveka Schwass and raised on the family farm in Riverton Township,... View Obituary & Service Information

The family of Jim Carlton Schwass created this Life Tributes page to make it easy to share your memories.

James &quot;Jim&quot; C. Schwass aged 89 of Scottville went to be with...

Send flowers to the Schwass family.