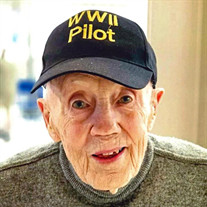 On Thursday evening, December 2, 2021, John Victor Bergh began celebrating in the presence with Jesus. John was born on July 28, 1922 in Houghton, MI, the son of Andrew Victor and Ebba Charlotta (Ohman) Bergh. He graduated from Houghton High School with the class of 1940 and attended Michigan Tech University studying Civil Engineering. John answered the call of his country and began serving with the United States Army Air Corps during World War II serving as a Pilot and Bomber Flight Instructor. Following his service, he returned to Houghton and finished his education earning his Bachelor’s Degree in 1946. John began his career serving as a Project Engineer for the State of Michigan Highway Department designing highways and bridges throughout the State of Michigan including assisting in the building of the Mackinaw Bridge. He worked on projects in all 83 counties including highways, freeways, bridges, and rest areas. After visiting every corner of Michigan, John chose to retire in Mason County, what he regarded as the most beautiful place in Michigan. He was appointed to serve on the Mason County Road Commission, eventually serving as Chairman and oversaw several projects throughout the county including the Jebavy Drive bridge over Lincoln River. His efforts for the State of Michigan led to a roadside park being named in his honor near Chase. On September 12 1987 he married Mary M. (Smith) Crawford, King at White Pine Village and they have celebrated 34 years together selflessly serving their Lord and Savior sharing the Gospel in Nursing Homes, Care Homes, and weekly Prison Ministries. Their weekly visits were greatly anticipated by staff and residents. John also enjoyed putting his engineering skills to good use designing and building several different homes for he and Mary over the years including their current home which he built in his 90’s. John will be greatly missed by his wife Mary; his son Roger (Tina) Bergh of Shelby; children Dawn (Steve) Lipps of Ludington, Almagean Crawford of Scottville, Steve Crawford of Reed City, Carl (Cindy) Crawford of Big Rapids, Jeff (Christine) Crawford of Ludington, Larry (Kellie) King of Traverse City, and Gwen King of Ludington; 19 Grandchildren; 31 Great-Grandchildren; and his brother Rev. Earl (Nijiko) Bergh of California. John was preceded in death by his daughter Carla (Swan) Bergh, son Charles Crawford, his parents Victor and Ebba, and his brother Newman Bergh, and sister Ruth Olson. A funeral ceremony to celebrate John’s life and ministry will be held at 11:00 AM on Thursday, December 9 at Wyman Funeral & Cremation Services in Scottville with his son Jeff Crawford officiating. Following the service, burial will take place at Fountain Cemetery with Honor Guard rites performed by the American Legion Post 76 of Ludington and the United States Air Force. Friends may visit with his family on Thursday morning from 10:00 – 11:00 am at the funeral home. The ceremony will be livestreamed via the funeral home Facebook page (Stephens Funeral Home – Wyman Funeral & Cremation Services). Those who wish to remember John with a memorial donation are asked to please consider St. Jude’s Children’s Research Hospital, Michigan Tech University or Hospice of Michigan.

The family of John Victor Bergh created this Life Tributes page to make it easy to share your memories.

Send flowers to the Bergh family.