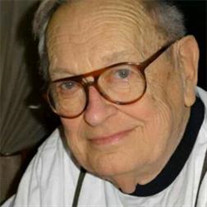 John William Blazek, age 85, died unexpectedly Sunday May 24, 2015 at Munson Memorial Healthcare in Traverse City surrounded by his family. John was born May 30, 1929 in Chicago, proud son of late Chicago Police officer John Blazek and Mae Blazek and loving brother of William Blazek. He graduated from Kelly High School in 1947. After high-school he proudly served as a Corporal in the United States Army from 1950-1953 and was honorably discharged after an injury. John went on to work in the folding box industry, working at Chicago Carton in Chicago in quality control, Integral Packaging in Chicago Heights as plant superintendent, Vice-president of production at Central Lakes Packaging in Harvey, Plant superintendent at Packaging Corporation of America in St. Louis and retired from Economy Folding Box in Chicago where he was the plant manager. On September 8, 1951, John married the love and pride of his life, Mary Jane Kabur of Irons at St. Bernard’s Catholic Church in Irons and together affectionately raised their four children in Chicago Heights, Illinois. They retired to Irons, Michigan in February of 1991. John was an active member, and past president of the Men’s Club at St. Bernard’s Church in Irons Michigan. He enjoyed fishing, tinkering and building things including clocks, and a G- scale railroad. John also built a fantastic A-frame cottage from slab to peak which the family enjoyed for years. John especially enjoyed working with his son John and grandson Peter restoring his 1939 Packard Six which he proudly showed in car shows and delighted in driving around town. John will be greatly missed by his loving wife Mary Jane (Kabur) Blazek of 63 years, their children John W. (Mary Jo) of Morgan Hill, California, Patricia Blazek of Tinley Park, Illinois, Mary (Thomas) Sauch of Bourbonnais, Illinois and Lilian Blazek of Irons, Michigan. His family will forever treasure him for his honesty, generosity, gentle guidance, encouragement, love, and continual support. He was affectionately known as a “John of all trades”. His memory will be cherished by his grandchildren: Dawn Predium, Amber Biscardi, Lauren Blazek, Peter and Daniel Melican, Natalie and Nicole Sauch and also his great-grandchildren Leah Biscardi, Ella and Xavier Predium. He will also be remembered by his brother-in-law Robert MacEachern, many loving nieces and nephews and his four legged companion Toby. The Mass of Christian Burial will be celebrated for John at 11:00 am on Friday, May 29 at St. Bernard Catholic Church in Irons with Rev. Dennis O’Donnell as celebrant. Burial will honors will follow at Eden Cemetery in Irons. Friends may meet with his family for a time of visitation on Thursday evening from 7:00 – 9:00 pm at the church with the Rosary prayed for John at 8:30 pm. Those who wish to make contributions in his memory are asked to consider St. Bernard Catholic Church, or the Myasthenia Gravis Foundation of America. - www.myasthenia.org -

The family of John W. Blazek created this Life Tributes page to make it easy to share your memories.

Send flowers to the Blazek family.