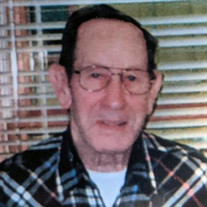 John Owen Fargo Sr. aged 89 of Ludington passed away two days short of his 90th birthday on April 12, 2021. John was born on April 14, 1931 in Frankfort, the son of Earl Walter and Bernice Grace (Stubbs) Fargo and graduated from Ludington High School. On April 2, 1955, he married Carol A. Boreson in Ludington and they celebrated 61 years together before Carol preceded him in death on June 3, 2016. John worked as a furnace installer in Ludington, first for Skoog Heating before joining his friends, the Hankwitz family, at Hankwitz Heating & Cooling where he enjoyed many years of employment and great friendship. In his retirement he could often be found working in his garden at home and spending more time deer hunting with his son John Jr. When John was younger, he enjoyed riding and working on his Indian Scout motorcycle and owned several Honda motorcycles through the years. His love of motorcycles was passed down to his son also. Along with his wife Carol, John was preceded in death by his parents; his brothers Veryl “Sonny” Fargo, Walter Fargo, and young brother Donald Fargo; his sisters Helen Johnson and Frances Harper; and his brother-in-law and best friend Richard Heer. John will be greatly missed by his son John (Nicole) Fargo Jr. of Walhalla; his grandchildren Rachel Marie (Roger) Perez, Jeremi (Megan) Hill, Linzie (Doug) Tiffany, Kala (Martin) Stakenas, and Carly (Brian) Lefler; 14 great-grandchildren; one great, great-grandchild so to arrive; his brother Harry Fargo; and numerous nieces, nephews, and cousins. Graveside services will be held for John at 11:00 am on Saturday, June 26th at Lakeview Cemetery in Ludington. A Celebration of his Life will follow at his son John Jr.’s home, 218 N. Campbell Road, Walhalla starting at 1:00 pm.

The family of John O. Fargo Sr. created this Life Tributes page to make it easy to share your memories.

Send flowers to the Fargo family.