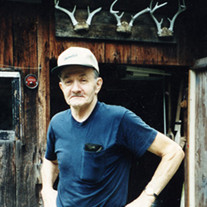 John “Jack” Nankee, aged 80 of Fountain, died Friday, October 3, 2008 at Memorial Medical Center in Ludington. Jack was born on January 15, 1928 in Victory Township to Otto W. and Loretta (Furlong) Nankee, and attended the Diamond School in Victory. He served his country with the United States Air Force, and married Lorraine Derringer, his “Queen” on March 4, 1978 in Ludington. They celebrated more than 28 years together before Lorraine preceded him in death on March 31, 2006. Jack was a man of many hats, working in the oil fields, as a dance instructor, plumber, electrician, carpenter, and for many years as a home mover in Saginaw. He enjoyed the company of his friends and family, and always had a story to share. His strong mind, knowledge of history, ability to do anything, and his great sense of humor could captivate anyone for hours. His greatest love was for his family. He cared for Lorraine’s children as his own, would spend as much time as possible with his grandchildren, and could always be counted on to help out or share advice when needed. Along with his wife Lorraine, Jack was preceded in death by his daughter Patty Ann Bonnett, his son Michael Vidak, his granddaughter Amy Dwyer, and his sisters Phyllis Lampman, Irene Bourgette and her husband Bob. He will be greatly missed by his children Bill & Laurie Nankee, Tom Vidak and his friend Rose Barkei, Linda and Arlyn Bolhuis, Rick and Joan Vidak, Nancy and Tom Erndteman; his son-in-law Pete Bonnett and his friend Dee McCumber; 25 grandchildren, many great-grandchildren, his brothers Don and Sue Nankee, Jim and Donna Nankee, and Herman Nankee; and several nieces and nephews.

The family of John ""Jack"" Kenneth Nankee created this Life Tributes page to make it easy to share your memories.

Send flowers to the Nankee family.