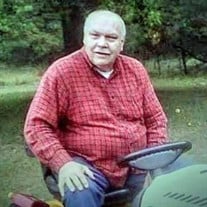 John “Jack” Knysz aged 71 of Irons, passed away unexpectedly on Thursday June 17, 2021. Jack was born in Chicago, the eldest son of Peter & Marcella (Gronskis) Knysz. After graduating from Brother Rice prep school, Jack served 2 terms in the US Army in Vietnam during the Vietnam Conflict. After returning home and furthering his education, Jack joined the Calumet City Police Department where he proudly served for 7 years. Jack excelled in many fields in his life, always eager to learn something new. His biggest reason for living was family, as his favorite job titles were “Dad” & “Grandpa Jack.” He could be heard saying almost daily, “nothing is more important than your family.” Jack’s daughter credits him for teaching her what unconditional love is. This love was not only to the people in his life, both family and friends, but also to animals. Throughout his life he rescued hundreds of animals, always doing whatever he could to care for them. He was always helping someone, even if the only help he could provide was just to make them smile. If you knew Jack, you loved him, and as he would say “everybody knows Jack,” therefore everyone loved him. Jack is dearly missed by his daughters Bonnie Knysz & Sarah Knysz; grandchildren Alexis (Christopher II) Hill, Mercedes Forsyth, Jayden Knysz, and Onyx McInerney; his great-grandchildren Annabelle Hill and Christopher Hill III; and his sister-in-law Tammie-Lynne Knysz. As a big family man, he is also missed by many other close relatives and friends, especially the nieces and a nephew that he loved and treated as his kids: Dawn, Pete, Rebecca, Krystalynne and Kendrah. He was also known as “Papa Jack” to Morgan, Peyton, Havoc, Chaos, Jaxson, Aubrey, Atheena, Tatyana and Shaundell Jr. Warmly greeting Jack at the gates of Heaven were his parents Marcella and Peter, brother Pete, sons John William and Eric, nephew Matthew, and niece April, along with other family and friends. The Mass of Christian Burial will be celebrated for Jack at 11:00 am on Saturday, July 3 at St. Bernard Catholic Church in Irons with his friend, Rev. Dennis O’Donnell as celebrant. Veteran Honors will follow the Mass. Friends may greet his family during a time of visitation on Saturday morning from 10:00 am until time of Mass at the church. Those who wish to remember Jack with a memorial donation are asked to consider Homeward Bound Animal shelter in Manistee.

The family of John P. Knysz created this Life Tributes page to make it easy to share your memories.

Send flowers to the Knysz family.