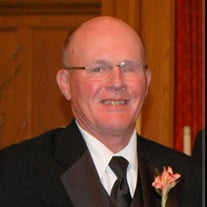 Jon L.'s Story Jon L Saxton was born on July 19, 1942 in rural Mason County, the only child of Orvan & Nondes (Leedy) Saxton. His parents owned a farm in Riverton Township where he grew up and attended East Riverton School. As a teenager, he attended Mason County Central Schools in Scottville, participating in football, and track, as well as playing trumpet in band and graduating with the Class of 1960. During his high school and college years, Jon L worked at Briggs Hardware in Scottville alongside his parents, who managed the store. Following high school, he attended Central Michigan University, earning his Bachelor’s Degree in 1964. During his college years and for a time after, he continued to help out his parents at Briggs, and also worked part-time for WKLA Radio in the area of advertising. In 1970, a full time position opened up at Scottville State Savings Bank, now West Shore Bank, where he worked for almost 30 years, and was employed in several different roles during his tenure. At the time that Jon L retired from his full time work, he was serving as the personnel director of the bank. During one summer while he was still working at Briggs, Jon L heard that the school had hired a cute young lady as the new band director. Before long, under the guise of needing valve oil for his trumpet, he managed to meet Miss Debbie Gale, a graduate of Michigan State University. They were wed on August 15, 1970 in Birmingham and celebrated 44 years of marriage, raising their son Brett and daughter Morgan. Jon L was a proud and loving father, never missing an opportunity to support his children in their school, their past-times or their play times. He took advantage of every occasion to share his pride in them and how they were doing. As a very active member of the community, Jon L served in many roles over the years. As a member of the Sugar Ridge Church of the Brethren he presided as Moderator, Deacon, President of the Board, Treasurer, and representative to the denomination’s Michigan District. Jon L’s service to his church was borne out of a deep and abiding faith. He was a Life Member and past President of the Scottville Optimist Club, honored as Optimist of the Year, and a longtime member of the Optimist Golf League at Lakeside Links. He and his partner, George Reeds, won the league more often than not and it was a past-time he thoroughly enjoyed. Jon L also resumed his trumpet playing as a member of the Scottville Clown Band, and was a proud and very vocal member of the CMU Century Club, holding season tickets for his beloved Chippewa Football team. A treasured highlight of his football fan life came the first time his CMU Chips beat Debbie’s MSU Spartans - in East Lansing – a victory that brought him much joy! Although Jon L retired from full-time work, he continued as a courier for the bank, worked at Lakeside Links golf course during the summer months, and was a dedicated Funeral Assistant at Stephens Funeral Home. He continued to enjoy golfing, both here at home and in Arizona, where he and Debbie had begun to spend their winters. His dry sense of humor and love of conversation will always be remembered and bring a smile to those who knew and loved him. Jon L could not have been more proud as he became a Grandpa – he had always had a special kindness for children and was thrilled to have grandchildren to cherish and dote upon. As an only child, he had taken on the responsibility of caring for his mother after his father Orvan passed away and he was a loving and devoted son, tending carefully to Nondes until her death. Jon L will be greatly missed by his family: his wife Debbie, his son Brett and Beth Saxton of Pentwater, his daughter Morgan of Mt. Pleasant, his grandchildren Spencer Bowman and Brayden Saxton, his mother-in-law Florence Gale of Prescott, AZ, his brother-in-law Geoffrey Gale and his niece Amber Gale, both of Flushing, MI. Funeral Services will be held for Jon L. at 11:00 am on Wednesday, July 30 at the Sugar Ridge Church of the Brethren with Pastor Dave Wood officiating. Burial will take place at Brookside Cemetery. Friends may meet with his family for a time of visitation on Tuesday evening from 6:00 – 8:00 pm at the STEPHENS FUNERAL HOME in Scottville, and on Wednesday morning from 10:00 am until time of services at the church. Those who wish to make memorial contributions are asked to consider the Sugar Ridge Church of the Brethren, the Scottville Clown Band Scholarship Fund, or the American Diabetes Association.

Jon L.'s Story Jon L Saxton was born on July 19, 1942 in rural Mason County, the only child of Orvan & Nondes (Leedy) Saxton. His parents owned a farm in Riverton Township where he grew up and attended East Riverton School. As a teenager,... View Obituary & Service Information

The family of Jon L. Saxton created this Life Tributes page to make it easy to share your memories.