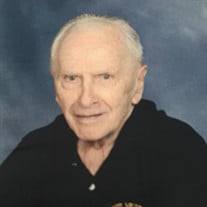 Joseph L. Astrauskas aged 92 of Pentwater passed away on Thursday, October 4, 2018 at Spectrum Health Ludington Hospital. Joseph was born on April 9, 1926 in Chicago, IL, the son of Joseph and Valeria Astrauskas. He served his country during WWII with the United States Army in Saipan. Following his service, he married Nellie Lesausky on October 11; 1947 at St. Mary’s Catholic Church in Custer and they celebrated 57 years together before Nellie preceded him in death on April 20, 2005. Joseph was also preceded in death by his parents and his son Michael and Nancy Astrauskas. Joseph worked over 30 years for the Brunswick Corporation, retiring in 1988. As a Technical Engineer for the company, he traveled all over the United States. In retirement, Joseph was able to enjoy playing pool with friends and reading his favorite mystery novels, but his greatest activity was visiting his family and spoiling his grandchildren. Joseph was a member of St. Mary’s Catholic Church and the Gold Bar VFW Post 5096 in Custer. Joseph will be greatly missed by his children Charles (Susan) Astrauskas of Pentwater, Dr. Leonard (Amy) Astrauskas of Goshen, CT, Martin Astrauskas of Thompsonville, Katherine (Steve) Broussard of Daytona Beach Shores, FL, and Rosalie (Frank) Dougherty of Ormand Beach, FL. Joseph will also be missed by his special friend Pat Gulleff, 10 grandchildren, 8 great-grandchildren, 5 great, great-grandchildren, his brothers Daniel (Doris) Astrausky of Ludington and Larry (Lynn) Astrauskas of Pierson, MI, and his sister Marcella Heglund of Scottville along with numerous nieces and nephews. The Mass of Christian Burial will be celebrated for Joseph at 11:00 am on Saturday, October 6 at St. Mary’s Catholic Church in Custer with Rev Dan DePew as celebrant. Burial will follow at St. Mary’s Cemetery. Friends may meet with his family during visitation on Friday evening from 6:00 - 8:00 pm at Wyman Funeral & Cremation Services in Scottville where the Rosary will be prayed starting at 7:00 pm. There will also be a time of visitation on Saturday morning from 10:00-11:00 am at the church. Those who wish to remember Joseph with a memorial donation are asked to consider the Leukemia and Lymphoma Society www.lls.org.

Joseph L. Astrauskas aged 92 of Pentwater passed away on Thursday, October 4, 2018 at Spectrum Health Ludington Hospital. Joseph was born on April 9, 1926 in Chicago, IL, the son of Joseph and Valeria Astrauskas. He served his country during... View Obituary & Service Information

The family of Joseph L. Astrauskas created this Life Tributes page to make it easy to share your memories.

Joseph L. Astrauskas aged 92 of Pentwater passed away on Thursday,...

Send flowers to the Astrauskas family.