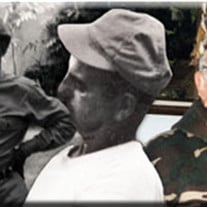 JOSEPH'S LIFE STORY:Joseph Chye was a loving gentleman who lived his life with quiet strength. With his generous spirit, Joseph was always willing to lend a hand or share advice, and was always there to support his family when needed. A WWII... View Obituary & Service Information

The family of Joseph John Chye created this Life Tributes page to make it easy to share your memories.

JOSEPH&#39;S LIFE STORY:Joseph Chye was a loving gentleman who lived...

Send flowers to the Chye family.