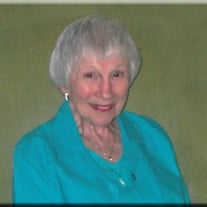 June E. Dombrouski, aged 95 of Irons, passed away peacefully at her home on March 25, 2020. June was born on June 29, 1924 at her family's home south of Baldwin in the community of Marlborough. She was the daughter of Ralph and Nellie (Leaird) Cecil. June attended White Cloud Public Schools and graduated with the class of 1943. An Easter dance was June and her future husband Frank's first date. They danced together that day, married on February 12, 1944, and continued to dance together beautifully for 65 years until Frank preceded her in death on April 1, 2009. June was also preceded in death by her daughter Anne, her granddaughter Jessica, her brother Donald and her sisters Mary and Ernestine. June and Frank farmed in Ravenna before moving to Belding where they both worked for Gibson Manufacturing. June was proud to say that one of the air conditioners from her shop and signed by her and her co-workers was placed in the Sears Tower in Chicago. After retirement they moved to their home on Big Bass Lake in Irons and were active members of St. Bernard Catholic Church. June was well known for her blueberry, apple and pumpkin pies. Her Christmas fudge was desired by many! She enjoyed playing pinochle and bingo with friends, belonged to Peacock Senior Center and most recently was a member of St. Ann Catholic Church in Baldwin. She contributed regularly to a charity that provided therapeutic craft kits for disabled veterans. June's greatest joy was found in the presence of her family. She will be greatly missed by her children Charon Phipps of Muskegon, Janet Dombrouski of Irons, Diane (Ron) Whitney of Irons, Frank (Colleen) Dombrouski Jr. of Belding and Mark (Sally) Ro of Hudsonville, 10 grandchildren, 14 great-grandchildren and 1 great, great-grandchild, her brother Albert Cecil of Tulsa, Oklahoma and many nieces, nephews and friends. Due to gathering restrictions, the Funeral Mass will be celebrated for June at 1:00 pm on Saturday, July 25th a St. Catherine's Catholic Church in Ravenna. A Memorial Mass will also be held for June later this year at St. Ann Catholic Church in Baldwin. Burial will aslso take place at St. Catherine's Cemetery in Ravenna. Those who wish to remember June with a memorial donation are asked to consider Hospice of Michigan.

June E. Dombrouski, aged 95 of Irons, passed away peacefully at her home on March 25, 2020. June was born on June 29, 1924 at her family's home south of Baldwin in the community of Marlborough. She was the daughter of Ralph and Nellie (Leaird)... View Obituary & Service Information

The family of June E. Dombrouski created this Life Tributes page to make it easy to share your memories.

Send flowers to the Dombrouski family.