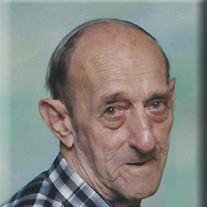 KARL'S OBITUARY:Karl Christian Jacob Golinck, aged 74 of Scottville, passed away on Monday, February 18, 2013 at his home. Karl was born on June 25, 1938 in Roscommon to Kao and Freda E. (Shirey) Golinck, and served his country with the United States Navy, retiring after 20 years of service including the Vietnam Conflict. Karl served as an Aircraft Mechanic, and enjoyed talking about his days in the Navy with friends, sharing his stories, and showing his memoirs. On February 14, 2005 he married Pamela Shope at Our Savior Lutheran Church in Scottville, and they have celebrated each day since by each other’s side. As a longtime fan of the Detroit Tigers, he enjoyed watching their ballgames, and always enjoyed watching a good western. He liked to go for rides with Pamela, which often ended up as a trip to the casino. Karl was also a proud member of the Custer Gold Bar VFW Post 5096. Along with his wife Pamela, Karl will be remembered by his stepson Rick Day of Scottville, his brother Lawrence Golinck of Prudenville, his stepfather Robert Macy of Ludington, his aunt Billie Morrell of Custer, his brother-in-law Jerry Hensley of Indianapolis, IN, his special friends Mary Toner and Janice Daniels both of Scottville, and several nieces and nephews. Karl was preceded in death by his parents, and his brothers Kenneth and Herbert.Funeral services will be held for Karl at 1:30 PM on Saturday, February 23 at the Stephens Funeral Home in Scottville, with Pastor Leo Anderson officiating. Burial with Full Honor Guard rites will take place at Bachelor Cemetery in the spring. Friends may meet with his family for a time of visitation on Saturday from 12:30 PM until time of services at the funeral home.Those who wish to make memorial contributions are asked to consider Heartland Hospice.

KARL'S OBITUARY:Karl Christian Jacob Golinck, aged 74 of Scottville, passed away on Monday, February 18, 2013 at his home. Karl was born on June 25, 1938 in Roscommon to Kao and Freda E. (Shirey) Golinck, and served his country with the United... View Obituary & Service Information

The family of Karl Christian Jacob Golnick created this Life Tributes page to make it easy to share your memories.

Send flowers to the Golnick family.