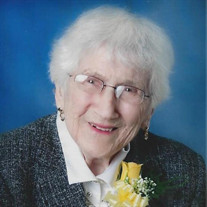 Strength, devotion, faith, artistry, and especially love are some of the many ingredients blended together in the life of Kathlyn Dobias. Whether she was patiently raising her six children, tenderly leading the students in her classroom, making a home with her husband, or sharing her strong faith, Kathlyn’s love for others always shown brightly. Following the end of World War I in Europe and the beginning of the “Roaring Twenties” Kathlyn Marie blessed the lives of Ervine Carl and Hester Evelyn Arletta (Rogers) Pankow when she entered the world on Wednesday, May 19, 1920 in Detroit. Kathlyn grew up in Roseville, a northwest suburb of Detroit, and began school at age 7, graduating from Roseville High School with the class of 1939. She began working as a telephone operator in Detroit until her family moved to Mason County in 1942 where she returned to education and attended County Normal School. Kathlyn had spent many summers and weekends in Mason County through the years visiting her grandparents. On one of her visits when she was 16, she attended a local dance and noticed a handsome young man playing the accordion with the band “The Hog Scrapers.” Jim Dobias caught her eye as she thought his music was romantic, and with the coaxing of her family, they were introduced. On October 2, 1943 they committed their lives to each other at St. John’s Lutheran Church at Pelton’s Corners and began a journey filled with love and adventure that would span nearly 70 years. Jim and Kathlyn were blessed with six children, Karen, James, Lorna, Linda, Matthew, and Mark, and raised their bustling family on their dairy farm just north of Scottville. Kathlyn loved her role as wife and mother, caring for her family. She was always the host for family holiday gatherings, cooking and baking all day in preparation for the celebrations. As the children grew and were all in school, Kathlyn decided to return to school as well. She attended Central Michigan University and earned her Bachelor’s Degree in Education, graduating in 1961. She began her career substitute teaching for the Mason County Central Schools, and went on to teach elementary and special education for Ludington Public Schools, mostly at the South Hamlin and Franklin buildings, retiring in 1982. As an active member of St. John’s Lutheran Church, and a charter member of Our Savior Lutheran Church in Scottville, Kathlyn shared her faith as a teacher for Sunday School and Vacation Bible School for many years. In retirement, Kathlyn rarely was idle, working in her garden, growing and sharing beautiful flowers, showing her artistic talent in her crafts, pottery, and quilts, or wintering with Jim in Lady Lake, Florida which provided the opportunity to meet many new friends. The foundation for Kathlyn’s character was her faith in God. She was devoted to her family, her husband, her God, and her church. Kathlyn was involved in the Bible study at church, and she and Jim looked forward to sharing devotions every day, even when they moved to Sherman Oaks Manor in 2008 and later to Oakview Medical Care Facility in 2011. Her beloved Jim preceded her in death on February 2, 2013. Kathlyn was also preceded in death by her brother Ervine, and her sister Florence. Kathlyn Marie Dobias reunited with Jim as she entered into glory on Saturday, October 25, 2014. She will be greatly missed by her children, Karen Rogers, and Lorna Dobias, both of Scottville, James (Mary) Dobias of Ludington, Linda (Thomas) Andresen of Cary, North Carolina, Matthew (Le’An) Dobias of Lawrenceburg, Tennessee, and Mark (Patricia) Dobias of Allegan; 11 Grand children, Blake (Kristy Lambert) McCleary, Ryan (Reyla) McCleary, Lori and Greg Dobias, Bryan Dobias (fiancée, Chelsi Clanton), Kellie (Clay) Coffey, Tanya (Keith) Merchant, Christian (Amanda) Andresen, Courtney Andresen, Emily and Elyssa Dobias; five great-grandchildren; her sister, Evelyn Battige of Newaygo, sisters-in-law Loretta Pankow of Ludington, Joan Dobias of Scottville, and Charlotte Dobias of Cheboygan. Funeral services will be held for Kathlyn at 11:00 am on Thursday, October 30, at Our Savior Lutheran Church in Scottville with Rev. James Schroeder officiating. Burial will take place at Sugar Grove Cemetery. Friends may meet with her family for a time of visitation on Wednesday evening from 6 - 8 p.m. at Wyman Funeral & Cremation Service - Stephens Funeral Home in Scottville, as well as one hour prior to the service at the church. Those who wish to make memorial contributions are asked to consider the Mason County Central Educational Foundation or Our Savior Lutheran Church.

Strength, devotion, faith, artistry, and especially love are some of the many ingredients blended together in the life of Kathlyn Dobias. Whether she was patiently raising her six children, tenderly leading the students in her classroom,... View Obituary & Service Information

The family of Kathlyn Marie Dobias created this Life Tributes page to make it easy to share your memories.

Send flowers to the Dobias family.