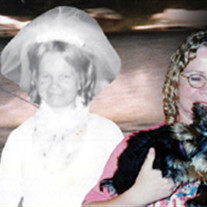 Kathryn Lesausky colored her world with love and intensity; the many facets of her personality brought affection and fun to everyone around her. Her infectious laughter, her zest for life, and her ability to overcome the health problems that... View Obituary & Service Information

The family of Kathryn Jean Lesausky created this Life Tributes page to make it easy to share your memories.

Kathryn Lesausky colored her world with love and intensity; the...

Send flowers to the Lesausky family.