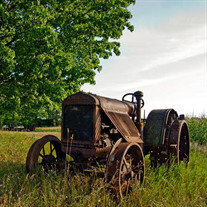 Keith Thurman Riffle aged 75 of Scottville passed away on Thursday, September 14, 2017 at Spectrum Health Butterworth Hospital in Grand Rapids. Keith was born on December 28, 1941 in Sherman Township, the son of Thurman C. and Beatrice A. (Marrison) Riffle, and graduated from Mason County Eastern High School with the class of 1960. On November 9, 1963 he married the love of his life, Beth Ilene Wood at the Scottville United Methodist Church and they have walked through life together, side-by-side for over 53 years. A farmer all his life, Keith and Beth operated their dairy farm with son Bruce on North Custer Road. When not on a tractor or working in the barns, Keith enjoyed working on crossword and word-search puzzles, and recently, caring for his beloved Beth helping her around the house. His greatest joy was found in the company of his family and he especially enjoyed spending time with his grandchildren. Keith and Beth were longtime members of the Scottville United Methodist Church. He was preceded in death by his parents Thurman and Beatrice and his brother Norman Riffle. Along with his wife Beth Keith will be greatly missed by his children Kevin Riffle and wife Carol of Allendale, Bruce Riffle and wife Kimberly of Custer, and Barbra Wills and husband Alan of Soldotna, Alaska; his grandchildren Jesse Goodwin, Samuel & Cassie Goodwin, Autumn and Maurice Woody, Erik and Katie Riffle, Elise Riffle and fiancé Samuel Barber, Trinity Wills, and Tristin Wills; his brother Ivan Riffle and wife Paulette of Howell, his sister Debbie Turner and husband Frank of Aurora, IL, his sister-in-law Lois Riffle of Fountain, his brother-in-law Ronald Wood and wife Neva of Scottville, and many aunts, uncles, nieces, nephews, and numerous cousins. According to Keith’s wishes, cremation has taken place and there will be no services or visitation. Those who wish to remember Keith with a memorial donation are asked to consider the Scottville United Methodist Church.

Keith Thurman Riffle aged 75 of Scottville passed away on Thursday, September 14, 2017 at Spectrum Health Butterworth Hospital in Grand Rapids. Keith was born on December 28, 1941 in Sherman Township, the son of Thurman C. and Beatrice A. (Marrison)... View Obituary & Service Information

The family of Keith Thurman Riffle created this Life Tributes page to make it easy to share your memories.

Keith Thurman Riffle aged 75 of Scottville passed away on Thursday,...

Send flowers to the Riffle family.