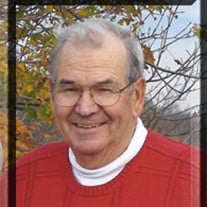 OBITUARY:Kenneth L. Ross, 73, of Scottville, died December 20, 2012 at Spectrum Hospital in Grand Rapids. He was born August 1, 1939 in Fountain to Ernest and Sybella (Brackett) Ross. Ken graduated from Custer High School in 1957 and received his Bachelor’s Degree in surveying from Ferris State University. Following graduation from Ferris, he enlisted in the United States Army and served honorably for four years. On April 15, 1967 he married Karen Lundquist and, shortly thereafter, began Ross Surveys, and served as the Mason County Surveyor for over 35 years. He enjoyed his job and was proud to serve the citizens of the county. Along with his work, he enjoyed fishing, hunting, golf, spending time with friends, and landscaping; but nothing gave him more joy than being with his family, especially his grandchildren. He was an avid follower of the professional Detroit sports teams and the University of Michigan Wolverines.Ken was preceded in death by his parents. He is survived by his wife Karen, sons Kelly (Robin) of Atlanta, Kyle (Diana) of Honor, and grandchildren Jacob, Austin and Aleiya. Also surviving is his brother Noel (Barb) of Wisconsin Dells, WI, sister Yvonne Hickerson of Onaway, brother-in-law Brian (Sheryl) Lundquist of Ludington, mother-in-law Betty Lundquist of Scottville, niece Tyler Lundquist and nephew Trent Lundquist, both of Ludington, along with other extended family and numerous friends.Funeral services will be held at 2:00 pm on Wednesday, December 26 at Scottville United Methodist Church with his pastor, Rev. Jack Conklin officiating. Visitation will be on Wednesday from 11 am until the time of the services at the church. Memorial contributions may be made to Scottville United Methodist Church, or to The Renucci Hospitality House of Spectrum Hospital.

The family of Kenneth Lee Ross created this Life Tributes page to make it easy to share your memories.

Send flowers to the Ross family.