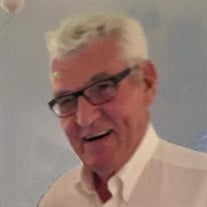 Larry Allan Smith aged 82 of Ludington passed away on November 8, 2020. Larry will be greatly missed by his wife of 27 years Joan Smith, his three daughters Patty (Jim) Terryn, Janet (Dean) Raspotnik, Karen (Bruce) Larsen; step-daughters, Barbara (Carl) Galeana, Cindy Urban and Nancy Urban; grandchildren Jamie (Nick) Eager, Billy (Jill) Terryn, Ryan (Alex) Raspotnik, DJ (Alecia) Raspotnik, Deana (Trevor) Schigur and Logan Larsen; step-grandchildren Holly (Rich) Dodt, Derek (Kate) Wilson; five great grandchildren and five step-great grandchildren; and one brother Gilbert Charpie. He was preceded in death by his first wife Martha, infant son Daniel, his mother, two sisters and one brother. Larry was born in Lapeer, Michigan on June 2, 1938. As an adolescent Larry entered the Foster Care System which placed him in the Ludington area. He had a great respect for his foster parents Mrs. German, Mr. & Mrs. Charpie, and Mr. & Mrs. Chuck Smith all whom he considered family. He graduated from Ludington High School with the class of 1956 and the following year enlisted into the United States Army, serving his country for the next three year. Larry married Martha Herrick in 1958 and settled in the Riverton area where they would raise their three daughters. During his lifetime he worked for Great Lakes Casting, 7-Up, Ludington Lumber, and finally for Standard Lumber from which he retired. In 1993 he married Joan Urban and they enjoyed many years together at Ford Lake and most recently residing in Ludington. They enjoyed their travels together and making life long memories. Larry loved the outdoors, especially deer hunting and fishing trips to Canada with his grandchildren and great-grandchildren. He was a huge supporter of his grandchildren and great-grandchildren, rarely missing any of their extra-curricular activities. His number one priority was always his family. Some of his final words were, “I am blessed.” During his lifetime he had overcame many obstacles, which made him the remarkable man he was. A Celebration of Larry's life will be held from 2:00 - 5:00 pm on Sunday, September 12, 2021 on the Garden Deck at Larsen's Landscaping, 3091 N. US 31 Highway, Scottville. Memorial contributions in Larry’s name may be directed to the family. The family will distribute all contributions to local Addiction and Recovery Centers. Larry was a proud member of AA for 17 years and he had a special place in his heart for the Walhalla AA Group.

The family of Larry Allen Smith created this Life Tributes page to make it easy to share your memories.

Larry Allan Smith aged 82 of Ludington passed away on November...